Sephardic cuisine refers to the foods eaten by a large and diverse group of Jews that bear the unique stamp of their regions of origin, which include Spain, North Africa, the Middle East, Egypt, and Turkey. Italian, Indian, and other non-European Jewish foods are also sometimes included in this mix.

There is logic to this broad grouping: Almost all of these lands were part of the Islamic world. The Arab conquest of the 7th and 8th centuries united land from the Iberian peninsula and the Atlantic Ocean to China and India. Active trading went on between these lands, spreading new food all over the region. Eggplant from India, spinach from Nepal, and spices from the Near East are examples of foods that spread throughout the Islamic empire.

Jews participated actively in Islamic society. They were successful in cultural, political, and financial arenas. Thus Sephardic cuisine often represents refined, even aristocratic, food. Besides the quality of the food, the Jews of the Islamic world stressed quantity as well. Asceticism was not valued, and lifecycle celebrations such as circumcisions and weddings were lengthy and luxurious.

Cookbooks that cataloged medical advice alongside recipes were a common genre of literature in the Muslim world. The 13th-century Cookbook of the Maghreb and Andalusia, one of the most important of these books, lists five Jewish recipes. All of these are full of spices and aromas and are detailed in their ingredients and preparation. One such dish, a chicken with giblets, was made with, among other things, fennel stalks, coriander, oil, citron leaves, eggs, flour, and chicken liver. The dish is first roasted and then left to sit in murri — a fermented condiment used in medieval cooking — vinegar, rose water, onion juice, and spices. All the dishes in the book, including the Jewish ones, exhibit delicate attention to flavor, texture, and presentation. Jews also authored recipe and dietetics books. Isaac Israelicus’ 10th-century Book of Foods was translated into Latin in the 15th century and used in medical schools until the 17th century. 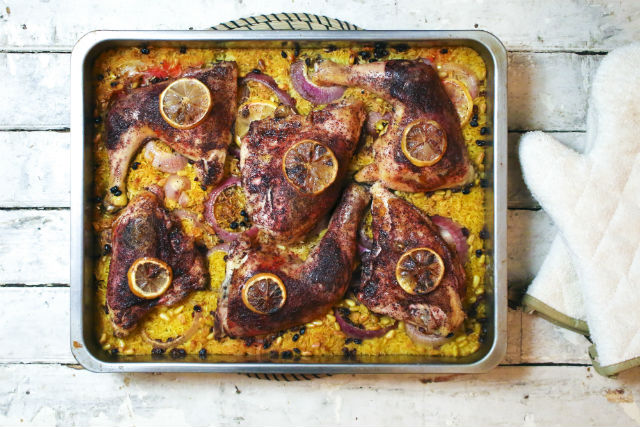 When the Jews were expelled from Spain in 1492, most made their way to North Africa and Ottoman lands such as Turkey and the Balkans. Half of the North African Jews lived in Morocco, and the Jewish style of food that was common there is still considered  one of Morocco’s four national food styles. The Jews who settled in the Ottoman lands were typically upper class, and their foods resembled the foods of the urban nobility. The kebabs, pilafs and dolmades (stuffed vegetables) of Turkish Jewry are still some of the most recognizable Sephardic dishes.

Fruits, vegetables, spices, and grains were plentiful in the Mediterranean climate, and thus plant foods figured heavily into Sephardic cuisine. Indeed, Jews were responsible for spreading the use of certain plant foods. Italian Jews prepared artichoke in an innovative way. Leeks and fennel, first used in Jewish cooking, were also later used in non-Jewish cooking in the area. Meats were eaten by Mediterranean Jews, but–except for Shabbat (the Sabbath)–fish was more often on the menu.

The Sephardic Jewish communities began to decline in the 18th century. Colonialism and natural disaster hit these communities hard and, on the whole, the Sephardic communities became impoverished. Nonetheless, Sephardic cuisine still retains the character of its unique heritage, a panoply of foods from many different lands that reflect an intense intermingling of cultures that were often well-to-do and sophisticated.

It is difficult to identify particular Sephardic foods as Spanish or Greek or Arab. The movement of the Sephardic community and the unique blending of cultures gave rise to an assimilated and variegated cuisine.