Jewish food is difficult to define. Over time, Jews have eaten many different types of foods, often no different from those of their gentile neighbors. Nonetheless, the foods Jews have eaten bear the stamp of the unique socio-economic and migratory patterns of the Jewish community, while also reflecting the Jewish dietary laws (kashrut) and other religious requirements; for instance, the prohibition against creating fire on Shabbat inspired slow-cooked Sabbath stews in both Sephardic and Ashkenazic cuisine.

Get Jewish recipes and food news in your inbox. Sign up for our free newsletters.

Jews and Food in the Ancient World

Seven types of produce are mentioned in Deuteronomy 8:8 — wheat, barley, grapes, figs, pomegranate, olives and dates. Legumes, wild plants, and meat — mostly mutton — were also eaten in biblical times. The dietary laws found in the Torah, and analyzed in detail in the Talmud, governed all eating in ancient years. The Torah and Talmud also enumerate other food-related laws, such as those related to the shmita or sabbatical year, during which all land must lay fallow. 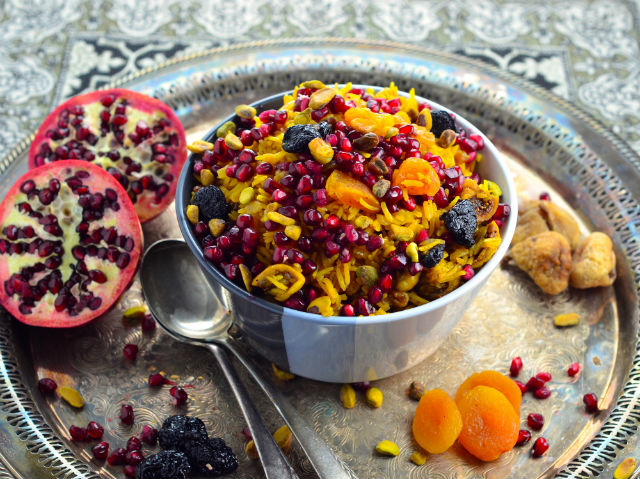 Sephardic cuisine refers to the foods eaten by the Jews of the Mediterranean, North Africa, the Middle East, the Red Sea region and India. Most of these lands were once part of the Islamic world, and they reflect the varied yet related food customs of this culture. In the early Middle Ages, the Jews in Islamic lands flourished culturally and economically. Their foods reflect this socio-economic position in quality, quantity, and presentation. After the Jews were expelled from Spain in 1492, most Sephardic Jews made their way to North Africa and the Ottoman lands, where they continued to influence and be influenced by local cuisine.

In contrast to Sephardic Jewry, most Ashkenazi Jews — those from Europe and Russia — were very poor, and their food reflects this. Ashkenazic food also reflects the migration of a community first based in Germany that ultimately spread eastward to Russia and Poland. What Americans usually refer to as “Jewish food”– bagels, knishes, borscht — are the foods of Ashkenazic Jewry, and indeed, in many cases were foods eaten by the non-Jews of Eastern Europe as well.

The “Jewish style” food of America is an enriched version of Ashkenazic cuisine. However, Jews existed in the U.S. long before the major wave of Eastern European immigration in the beginning of the 20th century. Though early Jewish life was located primarily in the major cities on the East Coast, Jews traveled and lived throughout the United States, and their foods were influenced by local custom and availability. Matzah balls with hot pepper in Louisiana and gefilte fish made from salmon in the Far West are examples of America’s influence on Jewish cuisine. The recent interest in health food has also affected Jewish eating. Derma (stomach casings) and schmaltz (chicken fat), once staples of Jewish cooking, are rarely used today.

Most of Israel’s culinary experts believe that Israel has yet to develop its own national cuisine. The foods most commonly referred to as Israeli — foods like hummus, falafel and Israeli salad — are actually common to much of the Mediterranean and Arabic world. Nonetheless, because of its international citizenry, certain government-sponsored kashrut laws, and the recent surge in American fast food — which produced a kosher McDonald’s — eating in Israel is a unique experience.