Looking for Mediterranean Jewish recipes? Scroll down to the bottom of this article!

At the time that the Jews were expelled from Spain in 1492, Turkey was the center of the Ottoman Empire, which existed from the late 13th century to its decline in 1924, when Kemal Ataturk, the designer of modern Turkey, abolished the Ottoman caliphate. Sultan Beyazit II, who reigned from 1482‑1512, responding to the expulsion with compassion but also a degree of opportunism, rescued the Jews from the Inquisition, causing the famous 16th‑century historian Rabbi Eliyahu Capsali to relate:

So the king of Turkey heard of all the evil that the Spanish king had brought upon the Jews and heard that they were seeking a refuge and resting place. He took pity on them, and wrote letters and sent emissaries to proclaim throughout his kingdom that none of his city rulers may be wicked enough to refuse entry to the Jews or expel them.

After that edict, Turkey, the Middle East, and the Balkans opened up their borders. Tens of thousands of expelled Jews came to Turkey. (Were they the boat people of the 15th century?) Istanbul, Salonika, Greece, and Izmir (formerly Smyrna) became important centers of the Sephardim.

The Iberian Jews of Spain and Portugal were highly educated in the professions, in international trade, finance, and medicine, and Sultan Beyazit, knowing this full well, welcomed this transfusion of human talent into Turkey. The Jews brought the first printing press to the Ottoman Empire, for example, and established a printing industry in 1494, two years after the expulsion.

They were not alone in their religion. They found, upon arrival in Turkey, Jews who were long‑time inhabitants of the region and known as Romaniates, pre‑Ottoman Empire Jews who were named thus through their early Roman connections. These Romaniates were ultimately, after some years, absorbed by the Sephardim.

The Jews lived in their own areas, maintained their own organizations, and created their own cuisine. Jewish men went forth into the cities to work, while the women for the most part remained at home. A lady from Izmir explained the Jewish cooking by saying that “The Turks borrowed from us and we from them.” Cooking rules and recipes were passed down from mother to daughter and resulted in a continuity of culinary ideas throughout the centuries and to the present.

There were two components that combined to develop Sephardic cooking in Turkey — Spanish heritage and Turkish culture. This was a gradual osmosis and not a rapid modification of existing cooking styles. The availability of fresh produce is an important factor in the creation of a cuisine and, in this case, new ideas were developed around ingredients that were available and inexpensive, like the eggplant. 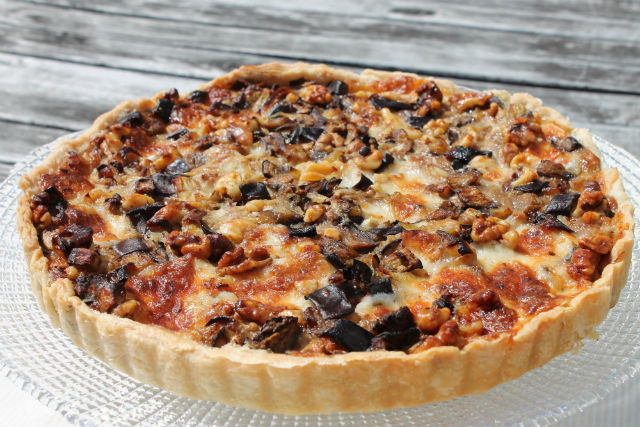 Jewish desserts were strongly influenced by the extraordinary capacity for sweets so dear to the Turkish palate. Syrups are lavishly used to enrich the pastries and provide a melting texture to cakes. Strong seasonings are hardly ever used in the Sephardic cuisine except for an occasional sprinkling of hot chili flakes. Chicken, beef, and lamb are the meats of choice, but in recent years less beef and lamb are used since red meat is now considered unhealthy. Cholesterol has entered the thinking of the Sephardic kitchen, and has even influenced the choice of cooking oil — sunflower has become the most popular. Duck is never eaten. I never saw a duck in Turkey (nor did I see a turkey!).

The Sephardic kitchen relies on appealing combinations of meats, vegetables or fish served up in casseroles, pies, stuffed vegetables or pastries, and Yufka (wrapped appetizers and snacks). The tendency is to bake foods or simmer them on top of the stove. The large meat roasts of European cooking are unknown. Bread is the staff of life, and rice, in the form of seasoned and garnished dishes, is not far behind.

There was an overlapping, rather than a sharp differentiation, between Jewish life in Greece and Turkey. Both countries were of the Ottoman Empire and there was a homogenization of both culinary and cultural Judaic activities. Without doubt, the Ottoman was the single strongest influence on the cooking—with emphasis on the sweets. But the native recipes were supplemented by those brought from Spain by the Jews, and those recipes continued to carry Ladino titles.

As in Turkey, the cooking consists largely of casseroles in the ovens, stews on top of the stove, and preparations wrapped in phyllo (culminating in the great classic Spanakopita). Vegetables are important ingredients in this cooking, stewed or enrobed in phyllo. Strong seasonings are even less important to the Greek palate than to the Turkish. The flavors result from the natural combinations of poultry, lamb, or fish and a variety of herbs and greens. The reign of the eggplant in Greece and Turkey is permanent. There are those who say that Greek cooking is no more than a satellite of the Turkish, but I am not of this opinion.

No cuisine is established in isolation nor is Sephardic cooking in Greece a carbon copy of that found in Turkey, although both clearly show the Ottoman influence. 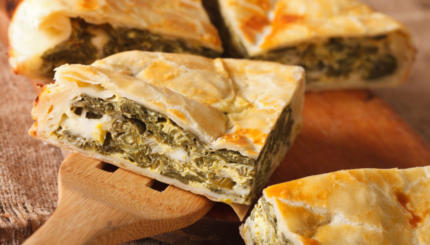