When Jewish families in Baghdad had big parties like weddings, which usually took place in the gardens of houses, they hired specialists to come and prepare masgouf. The specialists were the boatmen (ballamchi) on the river Tigris who brought in the fish every evening and cooked it on the riverbank in Baghdad. When the boats came in at around 9:30 in the evening, the boatmen went up to people sitting in the riverside cafes to take orders and proceeded to clean and cook the fish on the bank. By the time they were ready, the men in the cafes were drunk on arak and beer. In the summer, the riverside was dotted with the flames of brushwood fires against which were silhouetted the fish roasted upright. Among the happiest memories of Baghdad Jews are the picnic parties on the river Tigris. On hot summer nights, parties set out in the high‑prowed ballam (boats) with a supply of bread, fruit, and cold drinks, singing and playing the oud and tambourine.

The boatmen towed their catch behind by strings through the gills. They stopped upriver and started brushwood fires while they prepared the fish. They would cut the fish down the back, clean it, and rub it with salt. They hung each fish upright on four pointed stakes planted in the ground, cut side towards the fire, 14 inches (36 cm) from the fire, so that they cooked slowly while the topping of chopped onions and tomatoes was prepared with condiments and spices. When the fire burned down, the fish were put directly on the embers and covered by the juicy topping. For wedding parties in private gardens, the boatmen were hired to cook the fish in exactly the same way as they did on the riverbank.

Iraqi Jews were so fond of doing fish in this way that many try to reproduce the effect on a barbecue or in the oven. But it can never taste the same without the aroma of the burning brushwood. The choice of fish in the Tigris was limited to four–biz, shabbut, bunni, and dhakar–all closely related to the barbel, roach, and tench, in the carp family, of European waters.

In Iraq, they liked shabbut, which has very firm, fatty flesh and is very large–larger ones can feed up to eight people. Carp might be the equivalent in Europe, but other fish are preferred. Favorites for grand parties in London are sea bass, bream, and salmon, the last being most commonly used. Because shabbut tasted a little muddy, they used strong condiments and spices, such as curry powder and Worcestershire sauce, to flavor it. With salmon or sea bass, that is not done.

salmon, about 1/3 lb per person

Brush the fish with mild extra‑virgin olive oil and season with salt. Lay the whole fish or the fillets, skin side up, on a large shallow dish (laying it on foil makes turning over easier). Put it under the preheated broiler and cook for 6‑8 minutes, until the skin is crispy. Turn over and cook the flesh side for about 2 minutes or until done.

Now sprinkle the fish with the juice of 1 lemon and cover with a layer of diced ripe firm tomatoes–about 4 or 5. Sprinkle with salt and pepper and continue to cook under the broiler until the tomatoes are hot and the fish is done. Serve with pickled cucumbers or mango chutney. 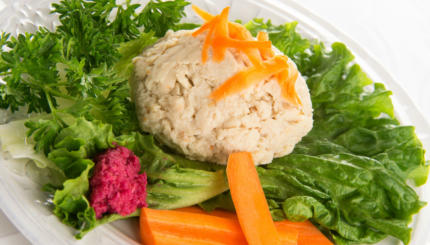 What’s the perpetual conflicting source of both gastronomic horror and Jewish nostalgic affection? Gefilte fish, of course! Gefilte fish is ...