Moroccan cuisine is considered the most inventive, flavorful and perhaps ingenious of the cooking styles of the Maghreb; at least the French say this about their former colony. Frequently, it is included in the world’s 10 greatest cuisines, which is an indication of its reputation in culinary circles. Jewish cooking is an amalgam of traditional local dishes married to Sephardic ideas brought to Morocco at the time of the Inquisition and, importantly, guided by kashrut (Jewish dietary laws). From these various influences, a universal Jewish style emerged and was polished over the centuries. 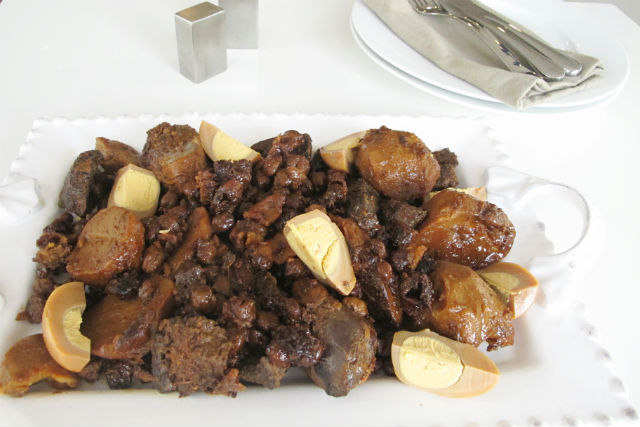 The hallmark of Moroccan cooking is the use of aromatic spices such as cinnamon, coriander, ginger, saffron, turmeric, and paprika for color. Dried fruits — figs, apricots, prunes, raisins —a re included in meat dishes and complement the spices that emphasize the sweet fruits. Almonds, walnuts and olives, the produce of a rich agriculture, are lavishly incorporated in many dishes. To top if off there is the famous harissa, a chili‑hot condiment, available for a sharp contrasting impact.

Salads in their numbers, both fresh and cooked, are some of the most popular concoctions in a semidesert atmosphere. From the Jewish point of view they are pareve and can be served with both dairy and meat dishes. Couscous is the single preparation most closely identified with Morocco and other Maghreb countries.

The Sabbath and its admonishment to pray and rest has also produced an assortment of scheena, those all‑inclusive one‑dish meals that are prepared late on Friday, cooked all night over smoldering coals, and are ready for dining after synagogue at noontime on the Sabbath. They are generally meat, potatoes, chickpeas and seasonings, very slowly baked and melting in flavor and aroma.

Pointed toward Spain but politically ruled by the whims of sultans, the town of Tangier lived a life of its own, distinct from both Spain and Morocco but dependent on both. The Jewish community, religious and poor, nevertheless developed a variety of dishes: some to celebrate the Sabbath, some for daily use, and many based on the inevitable couscous.

Fish was the principal food, the logical outcome of living in a port town with such quantity and variety of fish from the Mediterranean. The seasonings were mostly garlic, onion, tomato, herbs and the occasional cayenne pepper to stimulate the taste buds. No dramatic culinary styles were uncovered, but the sweet couscous of the Tangerines is unique. Homestyle cooking, leaning toward Spanish taste, is the key to the cooking of Tangier. 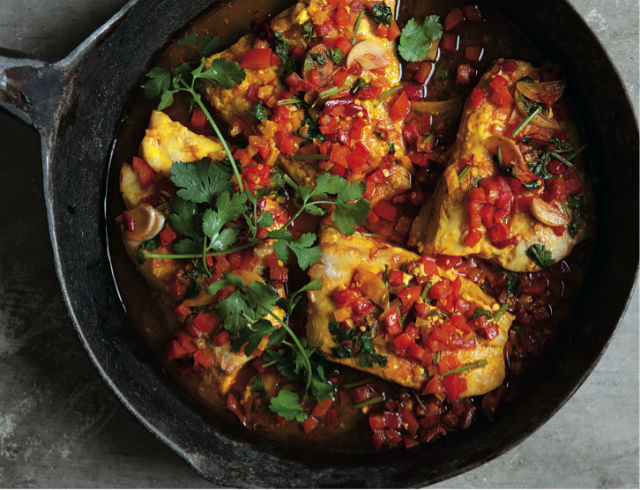 Following their expulsion from Spain in 1492, Jews crossed into North Africa and filtered into Tunisia, principally Tunis, joining the already‑settled community there in the Hara, the Jewish quarter, which had been established in the 11th century. An additional community from Leghorn (Livorno), Italy, joined the Tunisian Jews in the 16th and 17th centuries, thereby adding the Italian flavors and style of cooking to the existing cuisine.

A brief intrusion occurred in 1535, when the Spanish conquered Tunisia and ruled for about 40 years. They were fresh from their conquest of Mexico and Guatemala and it is logical that they may have brought the hot chili with them as well as other New World botanical discoveries, which profoundly influenced the cuisine. Hot chilies were incorporated into harissa, the ubiquitous spicy table condiment beloved by Tunisians.

The Turks conquered Tunisia from the Spanish in 1574 and introduced their celebrated pastries, which are the backbone of Tunisian sweets to this day.

No cuisine develops in isolation. The stage was now set for the assembly and evolution of a cuisine that included disparate but compatible ideas from the Phoenicians, Romans, Arabs, Spanish, Portuguese, Turks, Italians, and finally the French, when they established a French Protectorate in 1881. Tunis, the capital city, became an important center of Jewish learning.

It was the French, with their genius for culinary adventures, who pulled all the components of the existing cooking styles together. The presentation of dishes was of special importance in developing a sophisticated culinary environment and the French stressed this facet of food preparation.

A worldwide dissemination of foodstuffs resulted in such imports as the tomato from the Valley of Mexico, turmeric from India, the artichoke from the Romans — all for the delectation of the 19th‑century Tunisians.

Tunisian Jewish cooking in the 20th century is based on religious dietary laws, married to the existing established style of cooking that the Jews found upon their arrival from Spain, the use of this wealth of ingredients, plus their own intrinsic ingenuity in inventing or modifying local foods. Cooking for the Sabbath resulted in the t’fina of many varieties—that exclusively Jewish pot‑au‑feu, which obviates the necessity of cooking on the Sabbath. Then there is the couscous, the national dish of Tunisia, which the Jewish cook glorifies with several modifications.

Personal preferences in dining are not due to political exhortations but are reflections of a culture, a way of life, sometimes based on one’s economic status. The Jewish cooking of Tunisia, as in other countries of the Maghreb, often makes something out of nothing or more frequently places an individual stamp on the country’s existing style of cooking.

Jews from Leghorn, Italy, arrived in Libya in the 17th century. They settled in Tripoli, the capital, and the Italian influence on the cuisine began.

Couscous, a pasta, is the national food of Libya and of the Jews. It is prepared at home. Arab influence contributed cinnamon and other spices, which are used with meat, especially the use of the cinnamon stick, as being more subtle than the ground cinnamon. Italian influence inspired the use of tomato paste and sauces, which, in turn, came from Central America via the Spanish.

The hot red chilies especially took firm hold in the area and these are used generously although often subdued by lemon juice. Hot and pungent flavors are hallmarks of the cooking.

Libyan cooking is seasonal and depends upon the availability of vegetables and fruits. Jews had an obsession with the freshness of the foods, fish and fowl. Jewish men were the shoppers for the Sabbath and holidays, buying up the necessary quantity and variety of foods in the bazaar. The women stayed home and cooked.

T’fina, dishes prepared for the Sabbath, can be translated as “buried in the coals”—the way they once cooked the food and kept it warm until the families returned from the synagogue to partake of the Saturday noonday meal. Ashkenazis had their cholent and the Jews of Libya (and Tunisia) their t’fina. A grand illustration of this is the Lamb with Kishke and Peas. (Everyone has a word for it—in Morocco it’s scheena and in Baghdad, hameen.) 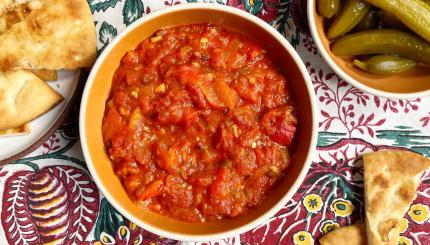 Have you fallen in love with matbucha yet?