Whether or not a “true Israeli cuisine” exists is something food critics and academics love to argue about. While such arguments are raging in the ivory tower, Israelis have continued to develop and enjoy a delicious cuisine rooted in the uniqueness of Israeli society itself.

Israeli cuisine exemplifies the true melting pot that is Israel. Hailing from over 80 countries, Jews have returned to their ancient land, bringing with them the foods and recipes they developed during their wanderings. These traditions have commingled with other Jewish recipes, Jewish dietary laws, and the native ingredients of the Land of Israel to create a dynamic cuisine.

All cuisines are a result of the interplay of many forces–historical, sociological, agricultural–and Israeli cuisine is no different. Therefore, many foods that are typically considered “Israeli” originated from the wider cuisine of the Middle East–including the popular falafel (deep-fried chickpea balls in pita) and the famous “Israeli salad” of cucumbers and tomatoes in distinctively small pieces. In addition, Jewish traditions of Eastern Europe play an integral role in Israeli cuisine, with ingredients such as sour cream and dishes such as borscht (a cold soup made from beets).

It is no surprise that geography has a large influence on the Israel cuisine, and therefore foods common to the region–olives and olive oil, wheat, chickpeas, yogurt–play a featured role in Israeli cuisine. Jewish dietary laws also have a strong influence, including the separation of milk and meat and the aversion to foods such as pork and shellfish. In addition, Jewish holidays and festivals have helped shaped the cuisine, resulting in the Israeli tradition of sufganiot (soof-gah-nee-oht; jelly doughnuts) on Hanukkah and an original Israeli haroset (chah-roh-seht; a traditional Passover food) recipe.

Israeli food customs also conform to the wider Mediterranean region, with lunch, rather than dinner, being the focal meal of the day. Jewish customs also have an influence, so Shabbat (Sabbath) dinner, and to a lesser extent Shabbat lunch, are the main festive meals in Israeli homes.

Falafel remains a favorite fast-food in Israel, and hummus (hoo-moos; a chickpea paste) is a staple in almost every Israeli home. Eggs also provide an important source of protein in Israeli society. Fresh fruits and vegetables, so plentiful and tasty in Israel, are cooked and served in creative ways. In Israel, vegetables are even eaten for breakfast. In addition, new recipes are continually being created, such as the “Eretz Yisrael Cake,” a recipe created by an Israeli olah (oh-lah; immigrant) from ingredients native to the Land of Israel.

Despite the modicum of controversy that surrounds Israeli food, there is one thing most agree on: it is delicious and creative. Beteavon (beh-tay-ah-vohn; Hebrew for good appetite)! 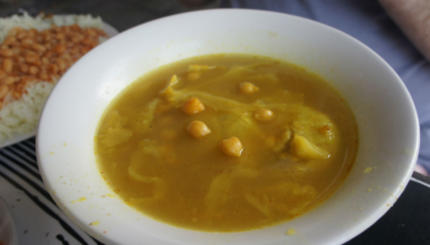 An Iraqi classic is hitting restaurants across the U.S.