After the Second World War, the British government, worn down by daily tensions and increas­ing pressure from abroad, decided to abandon its Palestine mandate, leaving the task of deciding its fate to the newly emerged United Nations. In the United States, wide sympathy was generated for the idea of a Jewish homeland as an answer to the plight of displaced Jewish persons, victims of the Holocaust who were stranded throughout Europe. When in May 1948 David Ben-Gurion, head of the Jewish Agency, declared Israel’s independence, American president Harry S Truman, and shortly thereafter the Soviet Union, enthusiastically recognized the new state.

The face of the new nation changed, and gradually a new culinary picture emerged. But first the infant state found itself surrounded by enemies, and absorb­ing 100,000 immigrants a year. This time the wave was comprised not only of displaced survivors of the Holocaust, but of Jews from all over the Middle East. With each ethnic group came different styles of eating and cooking.

The massive immigration was a strain on the economy, so the period from 1948 to 1958 was a time of government-regulated zena (food rationing) and ma’abarot (makeshift dwellings). Women cooked with khubeiza (wild greens) from the fields; new foods, like Ben-Gurion’s “Israeli couscous,” were intro­duced to satisfy the needs of the multicultural population; and surplus vegetables, like eggplant, were ingeniously used to simulate meat. Israel’s canning industry increased production, supplying canned tomato paste and puree, hummus, tahina, and mayonnaise in tubes.

One of the many issues to be resolved in this new Jewish country was the official position on the dietary laws [kashrut]. Ben-Gurion decided to remain with the “status quo” agreement, maintaining rabbinical supervision of kashrut in all government organizations, military service, schools, and hospitals.

Even the rabbis, however, had to compromise. The U.S. government, through the Agency for International Development, sent millions of pounds of preserved foods, such as dried eggs, dried skim milk, butter, dried codfish, and cheddar cheese. Maury Atkin, who worked at the newly created Israeli embassy in Washington at the time, recalled how the rabbis in Israel asked if the cheese was kosher. “We told them that cheddar cheese was the most wholesome cheese sold in America, even if it includes a small amount of non-kosher animal rennet. Because there were so many starving children, the Chief Rabbi of Israel issued an edict that the cheddar cheese sent over would be kosher for children up to the age of 14.”

READ: How to Make Israeli Hummus

Kosher meat was scarce as well. Before the war it was often imported to Pales­tine from Romania. After the war, it was eventually supplied from Uganda, Argentina, and Brazil. The only kosher beef in the early years of the state came from male calves produced from the rapidly growing herds of dairy cows. Under a Jewish Agency program, thousands of heifers were being sent to Israel from the United States by plane and ship. It was not until the late Fifties, however, when water sources had improved, that large herds of beef cattle were introduced into the Israeli agricultural economy.

As the fertility of the land increased, so did the excitement of creating food to meet the needs of the growing population. “Israel is unique,” said Shaul Homsky, author of Fruits Grown in Israel. “Within a small area, for example, a subtropical climate exists — near the Sea of Galilee, where mangoes, kiwis and bananas can grow — alongside a temperate climate in the mountains of Galilee and the Golan, where cherries and apples grow.”

Diversity of Israeli agriculture also has been affected by the constantly changing population; the European population that developed in the 1920s, ’30s, and ’40s was accustomed to eating apples, plums, and cherries, while later immigrants from Middle Eastern countries liked to eat and grow grapes, olives, and dates.

“Because of the lack of a deep agricultural tradition,” Mr. Homsky wrote, “farmers on the kibbutzim [agricultural collectives] were ready to accept new techniques and experiment with new fruits and vegetables, unlike in a coun­try like Greece, where for generations farmers have been tilling the soil in the same way and people have had the same diet.”

Sometimes the experiments did not work. In 1961, Moshe Dayan, minister of agriculture, decided to replace Israel’s favorite Marymont — a large, oval, and juicy tomato — with a thicker-skinned, cylindrical, and almost juiceless tomato, slightly larger than a cherry tomato. Dagan thought this “Moneymaker” would be heartier and cheaper to produce, and would appeal to the export market. In the transition from one strain of tomato to the other, 5,000 tons of Mon­eymaker tomatoes were to be grown in the first season, half for local consumption and half for export. Farmers were encouraged to grow only Moneymakers. But he experiment was a failure both inside and outside the country, and the local press dubbed it Dayan’s “assault” on agriculture.

Still, new fruits and vegetables had an increasing presence in the local market, and ambitious young chefs began to take advantage of their novelty. Chef Uri Guttman, who from the late ’60s on was considered the ambassador of the Israeli kitchen, came up with innovative concoctions like a hot avocado soup; “St. Peter’s fish” with mango and pomegranate; and crepes stuffed with pears, nuts, dates, and figs. Schooled in the French culinary tradition, Guttman traveled around the world representing Israel in cook­ing competitions and adapted unusual recipes to what was available in the country. He also developed menus for army bases and restau­rants, using local products. “One of my dreams was to establish an Israeli cuisine,” he said. “It is hard, though, with Jews coming from so many countries.”

When the Golan Heights were annexed in 1967, apples — one of the few fruits that the Israelis were not adept at growing — were planted there and thrived in the cold nights and the high, dry altitude. Israelis also had the same success with grapes at the Golan Heights Winery, close to the Syrian border. These new varietals were of a much higher quality than Baron de Rothschild’s plantings had been at his low-lying coastal wineries a hundred years earlier. The Golan Heights Winery, jointly owned by the nearby kibbutzim that supplied the grapes, introduced its first vintage in 1983, from grapes planted ten years earlier. These kosher wines have been winning sil­ver and gold medals in international competitions ever since.

In 1973, Dr. Itzhak Adate, a scientist with the Vulcani Institute in Rehovot [an Israeli city] went on a professional tour to New Zealand where he tasted the kiwi, which had been introduced from China. Bringing a few cuttings and seeds back, he asked the kibbutzniks at Kibbutz Ammiad, located down the road from his home, to plant them. By 1980 the first kiwis had come to the market. With the abundant crop, Scottish-born Jeff Marks, a wine hobbyist and a member of the kibbutz, suggested that kiwi wine might taste as good as cordials made from pears, berries, and plums. Today, the kibbutz exports kiwi wine to countries throughout the world. Ironically, although Israel’s agricultural industry is at the forefront of the global marketplace, kibbutz involvement has become proportionally less, with less than 2 percent of Israel’s population now living on the kibbutzim.

Throughout the Middle East, where emotions run high, politics also plays a major role in the complicated global market. Since the 1980s, for example, when all trade with Iran was blocked, Israel has become the main exporter of Iranian variants of mint, parsley, and other herb seeds for Iranian-American growers.

In the past two decades, with a general rise in disposable income and the elimination of travel taxes imposed on the struggling economy, Israelis have become open to new experiences in travel and food. After their two-year mandatory service in the Israel Defense Forces, many young Israeli soldiers go abroad, most frequently to travel in East Asia or Latin America and to spend some time working in the United States. Many of these young people return home with new culinary tastes, as did American Peace Corps volunteers in the 1960s. A number of them have become chefs, schooled in international cuisine and influential in the development of modern Israeli cooking.

Despite their global lifestyles, the new Israeli chefs still cultivate a link to the foods of the Old Testament. Grapes, dates, lentils, and chickpeas are but a few of the ancient ingredients that have captured their imaginations in producing signa­ture dishes. With constant waves of immigration, Israel is rapidly incorporating the native cuisines of its new populations.

The story of Israeli food is not just a Jewish story — its recipes cross borders more easily than people do. It is also the story of a land that has overcome harsh natural deprivation to bring forth new agricultural produce. Because it constantly incorporates so much from the rest of the world, Israel may never boast of one “cuisine,” but it will always retain a rich mixture of fine tastes. It reflects the modern mosaic of the country, embracing the culinary influences of its Arab neighbors and accommodating the varied tastes of the world’s Jews.

This article is reprinted from The Foods of Israel Today. 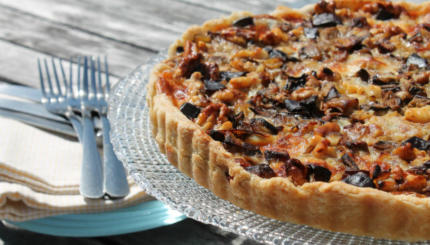 It is pretty customary for children to treat mom with a lovely brunch in a nice restaurant on Mother’s Day–no ... 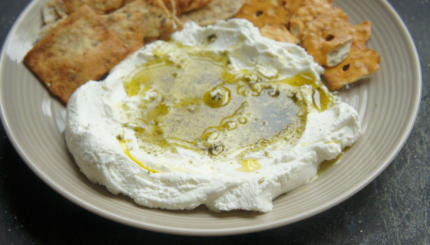 Making Your Own Labneh

When I have the urge to travel it’s often motivated by a particular food I’m craving. For example, I would ...