Every Israeli has an opinion about falafel, the ultimate Israeli food, which is most often served stuffed into pita bread. One of my favorite spots is a simple stand in the Bukharan Quarter of Jerusalem, adjacent to [the ultra-Orthodox neighborhood] Mea Shearim. The Bukharan Quarter was established in 1891, when wealthy Jews from Bukhara [in what is now Uzbekistan] engaged engineers and city planners to plan a quarter with straight, wide streets and lavish stone houses.

For more Israeli recipes, check out The Nosher, our lively Jewish food blog.

After the Russian Revolution, with the passing of time and fortunes, the Bukharan Quarter lost much of its wealth, but even so the area retains a certain elegance. There, the falafel is freshly fried before your eyes and the balls are very large and light. Shlomo Zadok, the elderly falafel maker and falafel stand owner, brought the recipe with him from his native Yemen.

Zadok explained that at the time of the establishment of the state, falafel — the name of which probably comes from the word pilpel (pepper) — was made in two ways: either as it is in Egypt today, from crushed, soaked fava beans or fava beans combined with chickpeas, spices, and bulgur; or, as Yemenite Jews and the Arabs of Jerusalem did, from chickpeas alone.

You may also enjoy our recipes for hummus, Israeli salad, pita bread and sabich.

But favism, an inherited enzymatic deficiency occurring among some Jews — mainly those of Kurdish and Iraqi ancestry, many of whom came to Israel in the 1950s — proved potentially lethal, so all falafel makers in Israel ultimately stopped using fava beans, and chickpea falafel became an Israeli dish.

The timing was right for falafel in those early years, with immigrants pouring in. Since there was a shortage of meat, falafel made a cheap, protein-rich meal­; and people liked it.

Rachama Ihshady, daughter of the founder of another favorite Jerusalem falafel joint, Shalom’s Falafel on Bezalel Street, told me that her family recipe, also of Yemenite origin, has not changed since [the British Mandate, when pre-state Israel was under British rule]. Using the basics taught to me by these falafel mavens, I have created my own version, adding fresh parsley and cilantro, two ingredients I like and which originally characterized Arab falafel in Israel.

Give me mine wrapped in a nice warm pita bread, swathed in tahina sauce and overflowing with pickled turnip and eggplant, chopped pep­pers, tomatoes, cucumbers, amba (pickled mango sauce) — and make it harif, Hebrew for “hot.” The type of hot sauce used, of course, depends on the origin of the falafel maker.

Reprinted with permission from The Foods of Israel Today (Knopf).

Soybean or vegetable oil for frying

Put the chickpeas in a large bowl and add enough cold water to cover them by at least 2 inches. Let soak overnight, then drain. Or use canned chickpeas, drained.

Place the drained, uncooked chickpeas and the onions in the bowl of a food processor fitted with a steel blade. Add the parsley, cilantro, salt, hot pepper, garlic, and cumin. Process until blended but not pureed.

Sprinkle in the baking powder and 4 tablespoons of the flour, and pulse. You want to add enough bulgur or flour so that the dough forms a small ball and no longer sticks to your hands. Turn into a bowl and refrigerate, covered, for several hours.

Form the chickpea mixture into balls about the size of walnuts, or use a falafel scoop, available in Middle Eastern markets.

Heat 3 inches of oil to 375 degrees in a deep pot or wok and fry 1 ball to test. If it falls apart, add a little flour. Then fry about 6 balls at once for a few minutes on each side, or until golden brown. Drain on paper towels. Stuff half a pita with falafel balls, chopped tomatoes, onion, green pepper and pickled turnips. Drizzle with tahini thinned with water. 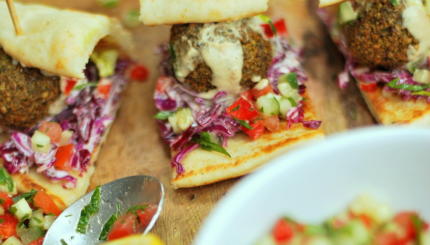