Shehechiyanu: A Meditation on this Moment

You might not equate Hollywood with holiness, but if you watch closely, you can often catch snippets of Jewish prayer popping up in movies, music and TV shows. Here are some of our favorite Jewish prayer moments in pop culture.

Prayer: Aleinu
This 1979 western comedy features Gene Wilder as a rabbi who secures the help of an outlaw (Harrison Ford) to help get him to San Francisco. There are loads of Jewish references in this movie, but in the clip below Wilder, clad in tallit and tefillin and shuckling like his life depends on it, recites the Aleinu prayer.

Prayer: Torah Blessings
This classic ABC sitcom chronicles the 1960s suburban childhood of Kevin Arnold (Fred Savage). In the 1989 episode “Birthday Boy,” Kevin’s best friend Paul is called to the Torah for his bar mitzvah, reciting the blessings in Hebrew and chanting the first part of the Torah portion that recounts the violence visited by Amalek on the ancient Israelites after their departure from Egypt.

Prayer: Unetaneh Tokef
Jewish themes suffuse the work of the poet and songwriter Leonard Cohen, but few connect as directly to a specific piece of Hebrew liturgy as well as “Who By Fire,” which draws heavily from the High Holiday prayer Unetaneh Tokef. The prayer lists the various ways in which death is visited upon the unrepentant, and Cohen puts his particular spin on it: “And who in her lonely slip, who by barbiturate?”

Prayer: Mourner’s Kaddish
During a pre-fight scuffle with Clubber Lang (Mr. T), longtime coach Mickey Goldmill (Burgess Meredith) is shoved and suffers a heart attack. Rocky (Sylvester Stallone) goes on to lose the fight to Lang in a knockout. At Mickey’s funeral, Rocky recites the Mourner’s Kaddish, prompted line by line by a rabbi.

Prayer: Kol Nidre
Neil Diamond’s 1980 remake of the 1927 Al Jolson classic tells the story of Yussel Rabinovitch, a New York cantor lured to California by the promise of a music career. After splitting from his wife and taking up with a non-Jewish woman, he is disowned by his father. At the film’s end, Yussel returns to New York to chant the Kol Nidre prayer and reconcile with his father.

Prayer: Viduy
Among the most Jewish television series in recent years, “Transparent” is the story of Maura Pfefferman, a transgender woman living in Los Angeles, and her three grown children. Josh, the only boy, is dating a rabbi, and the scene in her synagogue on Yom Kippur includes one of the most accurate and unnerving depictions of the Viduy prayer ever committed to film.

Prayer: Sim Shalom
Larry David’s L.A. comedy may be the only show on television that gives “Transparent” a run for its money when it comes to the sheer volume of Jewish references. Shabbat, Yom Kippur, the Israeli-Palestinian conflict, the Holocaust — all have been the targets of David’s irreverent humor. In this scene, Larry is ejected from services on Yom Kippur after he purchases tickets from a scalper.

Copywriter Michael Ginsberg (Ben Feldman) doesn’t command nearly the same interest as the show’s leading man Don Draper (Jon Hamm), but he does have a compelling Jewish backstory, having been born in a concentration camp and adopted as a young child. When he arrives home one day to tell his father he was hired by an ad agency, the father puts his hands on his son’s head and recites the Priestly Blessing.

Prayer: B’rikh Shmei
Though it’s a little hard to make out, this 1981 Steven Spielberg classic might take the prize for most obscure Jewish prayer to appear in film. When Nazi sympathizer René Belloq (Paul Freeman) goes to open the Ark of the Covenant, he recites a passage from the Aramaic prayer B’rikh Shmei, which is traditionally recited prior to the reading of the Torah.

Prayer: Torah service
This may be the most Jewy of all the Coen brothers’ movies. While the film is mainly focused on the travails of Larry Gopnik (Michael Stuhlbarg), a physics professor living in suburban Minnesota, the funniest depiction of Jewish prayer is when Larry’s son Danny (Aaron Wolff) gets seriously stoned before his bar mitzvah and can barely make it through the reading. 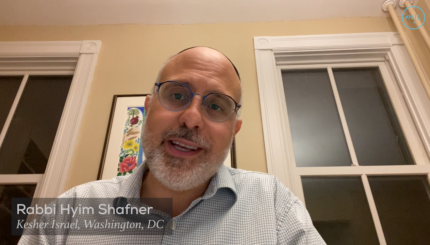 Watch a High Holidays sermon from the spiritual leader of Kesher Israel in Washington, DC. 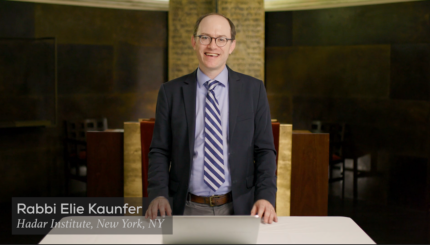 Watch a High Holidays sermon from the president of the Hadar Institute in New York, NY.