The Sabbath (in Hebrew, Shabbat, pronounced shah-BAHT–or in some communities, Shabbos, “SHAH-bis”) may be Judaism’s most distinctive and characteristic practice, as well as one of its most pervasive and long-lasting gifts to Western civilization.

A weekly 25-hour observance, from just before sundown each Friday through the completion of nightfall on Saturday, Shabbat is more than just a day off from labor. It is a day of physical and spiritual delights that is meant to illuminate certain key concepts in the traditional Jewish perception of the world.

Shabbat is portrayed in the Bible as the pinnacle of the creation of the universe, and its observance can be seen as a reminder of the purposefulness of the world and the role of human beings in it. Shabbat also serves as a memorial to God‘s act of rescuing the Israelites from slavery in Egypt by setting aside a day for personal autonomy and freedom from the harsh demands of labor. The traditional Shabbat is portrayed in Jewish liturgy, song, and story as a day of joy, a sanctuary from travails, and even a foretaste of the perfected world that will someday be attained.

Shabbat, like many important facets of Judaism, has its origins in the Torah, where it is most notable as a day of complete cessation of labor. The prophetic tradition portrays it as a day of pleasures as well. The Rabbis spelled out their understanding of forbidden “labor” in a complex series of restrictions on productive activities of many sorts. They also prescribed festive meals and ceremonies for every part of the day. The varieties of Shabbat observances and customs over the ages and around the world illustrate the adaptation of Jews in many societies to new realities and modern ideas.

One constant theme in Shabbat observance across time and territory is the centrality of home life with family members and guests. Preparation for Shabbat begins as early as mid-week in some households, and its arrival is marked by the spiritual illumination of a candle-lighting ceremony. Rabbinic tradition mandates three Shabbat meals, two begun with a special kiddush (“sanctification”) recited over wine. Family meals are occasions for singing, studying, and celebrating together, as well as for consuming distinctive Shabbat foods.

Shabbat observance in the public sphere is focused on the synagogue, from the lively welcoming service, Kabbalat Shabbat, to the pensive farewell ceremony, Havdalah. The daily round of prayer services is augmented and endowed with a unique atmosphere. Special melodies and liturgy are used, and the familiar prayers are supplemented with passages in prose and poetry extolling God for the divine gift of the Shabbat and its delights. At the major worship service on Saturday morning, a portion of the Torah is read aloud as part of a year-long cycle, supplemented by a passage from one of the prophetic books (called a haftarah). 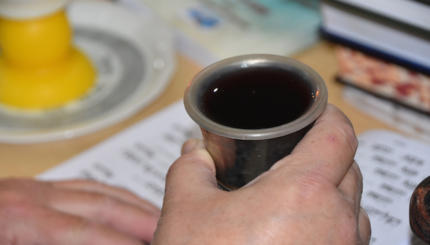 History and Development of Shabbat

The rabbis of antiquity deduced that all labors necessary for constructing a sanctuary and its appurtenances should serve as the blueprint for Shabbat prohibitions.

The Rabbis used requirements and prohibitions to shape a Shabbat experience in which creative activity is set aside to make time for matters of the spirit. Second of two parts.