The idea that body movement can express devotion to God appears in the Book of Psalms: “All my limbs shall say ‘Who is like You, O Lord?’” (35:10) In Midrash Tehillim, an 11th-century exegetical text, the rabbis interpret “all my limbs” quite literally:

With my head, I bend my head and bow down in prayer…And I also wear phylacteries [tefillin] on my head. With my neck, I fulfill the precept of wrapping oneself in fringes [tzitzit]. With my mouth, I praise You, as it says: “My mouth shall speak the praise of the Lord” (Psalms 145:21)…With my face, I prostrate myself, as it says: “He fell down on his face to the earth” (Genesis 48:12)… With my nose, when I smell spices with it [during the Havdalah blessing said] at the outgoing of Shabbat. With my ears, I listen to the singing of the Torah.

In this text, the body is presented as a tool for praising God, mostly in terms of the way ritual objects are used on the body, but also in terms of the body’s own movements. Today, the physical actions listed in this midrash, as well as a number of other body movements, have become an established part of Jewish prayer.

Though many Jewish prayers can be recited while seated, standing is perhaps the most essential physical position of Jewish prayer. When the rabbis of the Talmud refer to prayer, they are almost always referring to the “Amidah,” or “Standing Prayer.” Like its name suggests, this prayer is recited while standing in silent devotion, as if one were standing before God. It is also customary to take three steps back and three steps forward when beginning the Amidah, as if approaching God, and when ending the Amidah, as if returning to the world of the profane.

In synagogues today, standing is required during some common daily prayers such as Barekhu and Aleinu. One special service, Neilah at the end of Yom Kippur, is traditionally recited entirely standing.

There is some variation in how communities decide when to stand. For example, while many communities have the custom to stand every time the Kaddish is recited, some communities only stand for the Mourners Kaddish, or only when the Torah is moving. Additionally, it is the general practice of Conservative and Orthodox communities not to stand for the Shema. Sitting helps one maintain concentration and the Shema is considered Torah study, which is traditionally done sitting.

In contrast, most Reform communities do stand for the Shema, as to publicly indicate the importance of this prayer to Jewish tradition. However, the variation of different communities regarding whether or not to stand all relates to the same core question, namely how to best convey seriousness and respect during prayer.

In the Bible, Daniel expressed his devotion to God when he “kneeled upon his knees three times a day, and prayed, and gave thanks before his God, as he had done previously” (Daniel 6:11). Liturgical scholar Uri Ehrlich notes that Daniel’s bows would have been full prostrations, with almost his entire body thrust on the ground, as was standard in ancient Israel.

By the rabbinic period, the standard bow became simply bending one’s knees and upper body. The Talmud states, “In reciting the Tefillah one should bow down at the appropriate places until all the vertebrae in the spinal column are loosened” (BT Berakhot 28b).

Many of the common bowing moments in prayer concern statements of blessing. Most notably the Barkhu prayer, which begins the morning and evening services, requires a bow, as do the first and last two blessings of the Amidah.

The full prostration on the ground, described in the Book of Daniel, has not been totally lost to Jewish practice. In Ashkenazic communities today, during Aleinu in the Mussaf service on High Holidays, some people bow all the way to the ground.

While standing and bowing are halachically (according to Jewish law) mandated at various parts of the service, other movements can demonstrate one’s passion for worship. In Hasidic and neo-Hasidic communities, ecstatic dancing and clapping can be part of a prayer service. A more common movement of this nature is swaying, often known by the Yiddish term shucklen. The practice has become natural for many Jews who engage in regular prayer.

According to the Kuzari, the 12th-century philosophical work by Rabbi Yehudah Halevi, swaying was a practical custom when people frequently prayed out of a single book, and moved up and down to make room for the many others who wanted to use that book.

The Zohar offers a more spiritual explanation for swaying: “When a Jew utters one word of Torah, the light [in his soul] is kindled…and he sways to and fro like the flame of a candle” (Zohar to Numbers, 218b-219a).

A potentially simpler reason is provided by the Arukh Ha-Shulhan, written by Rabbi Yehiel Michel Epstein in the 19th century. He asserts that many sway during prayer because it improves their kavannah (spiritual intensity) and helps engage the individual in conversation with God

Some physical movements are integrated into Jewish prayer as a way of dramatizing contrition. It is customary to gently hit one’s breast with a closed fist, in a symbolic “I’m sorry”, when reciting certain confessional liturgy: particular on the High Holidays. Similarly, part of the Tahanun prayer is recited with heads bent down, showing embarrassment for having sinned.

Other body movements are harder to understand. Some people raise their pinky fingers in the air during the Torah service, for the line “And this is the Torah that God gave to Moses”; the source and meaning of this action is unknown. Similarly mysterious is the V-shaped hand configuration used during Birkat Kohanim, the Priestly Blessing.

Pronounced: ah-LAY-new, Origin: Hebrew, it is the name of a prayer that marks the end of all three daily prayer services.

Why Do Some Jews Sway in Prayer?

Also known as shuckling, this movement is particularly common in Hasidic worship. 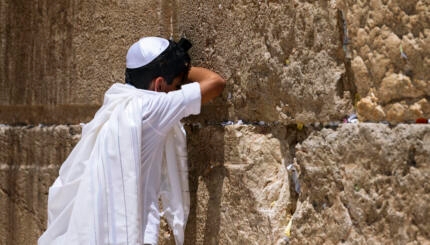 In its tone and its language, this daily prayer nods to the themes and postures of the High Holidays.