The first communal prayer service of Yom Kippur actually takes place immediately prior to sunset on the evening of Yom Kippur. This service is called Kol Nidrei (“All Vows”). These are the first words of a special legal formula that is recited at the beginning of this service and is chanted three times. This legal ritual is believed to have developed in early medieval times as a result of persecutions against the Jews. At various times in Jewish history, Jews were forced to convert to either Christianity or Islam upon pain of death.

However, after the danger had passed, many of these forced converts wanted to return to the Jewish community. However, this was complicated by the fact that they had been forced to swear vows of fealty to another religion. Because of the seriousness with which the Jewish tradition views verbal promises, the Kol Nidrei legal formula was developed precisely in order to enable those forced converts to return and pray with the Jewish community, absolving them of the vows that they made under duress.

This ancient ceremony found a special place in the hearts of the Jewish people and has been maintained for centuries as an especially solemn and moving introduction to the holiday evening service of Yom Kippur. Kol Nidrei has no effect upon vows or promises that we make and break with other people. They still remain valid and, if broken, forgiveness and absolution must be sought from the people affected — and not from God. As the Talmud teaches, “Yom Kippur does not forgive transgressions between a man and his fellow — until (or unless) he seeks forgiveness from him (directly)” Mishnah Yoma 8:9.

Erev [the evening of] Yom Kippur is the only night of the entire Jewish calendar when a tallit (prayer shawl) is worn in the evening. As a matter of fact, it is traditional to wear a tallit or a white garment for the whole of the holiday, the color white symbolizing both our spiritual purity and our withdrawal from the vanities of this world. (A white robe, called a kittel, is worn by traditionally observant men over their holiday clothes. Others may choose to wear a white item of clothing or dress completely in white.) 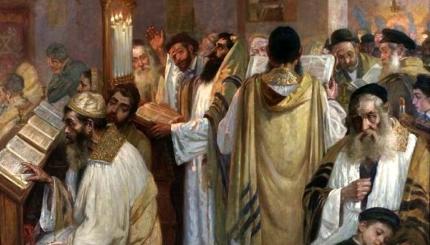 The evening service opening the Day of Atonement is one of the most emotionally intense of all Jewish prayers.