Yom Kippur, the Day of Atonement, falls nine days after Rosh Hashanah and concludes the Ten Days of Awe (Yamim Nora’im). Yom Kippur is a solemn day of prayer and fasting on which Jews pray for spiritual purification from past transgressions. The liturgy for Yom Kippur and Rosh Hashanah is found in the Mahzor, the High Holiday prayer book. 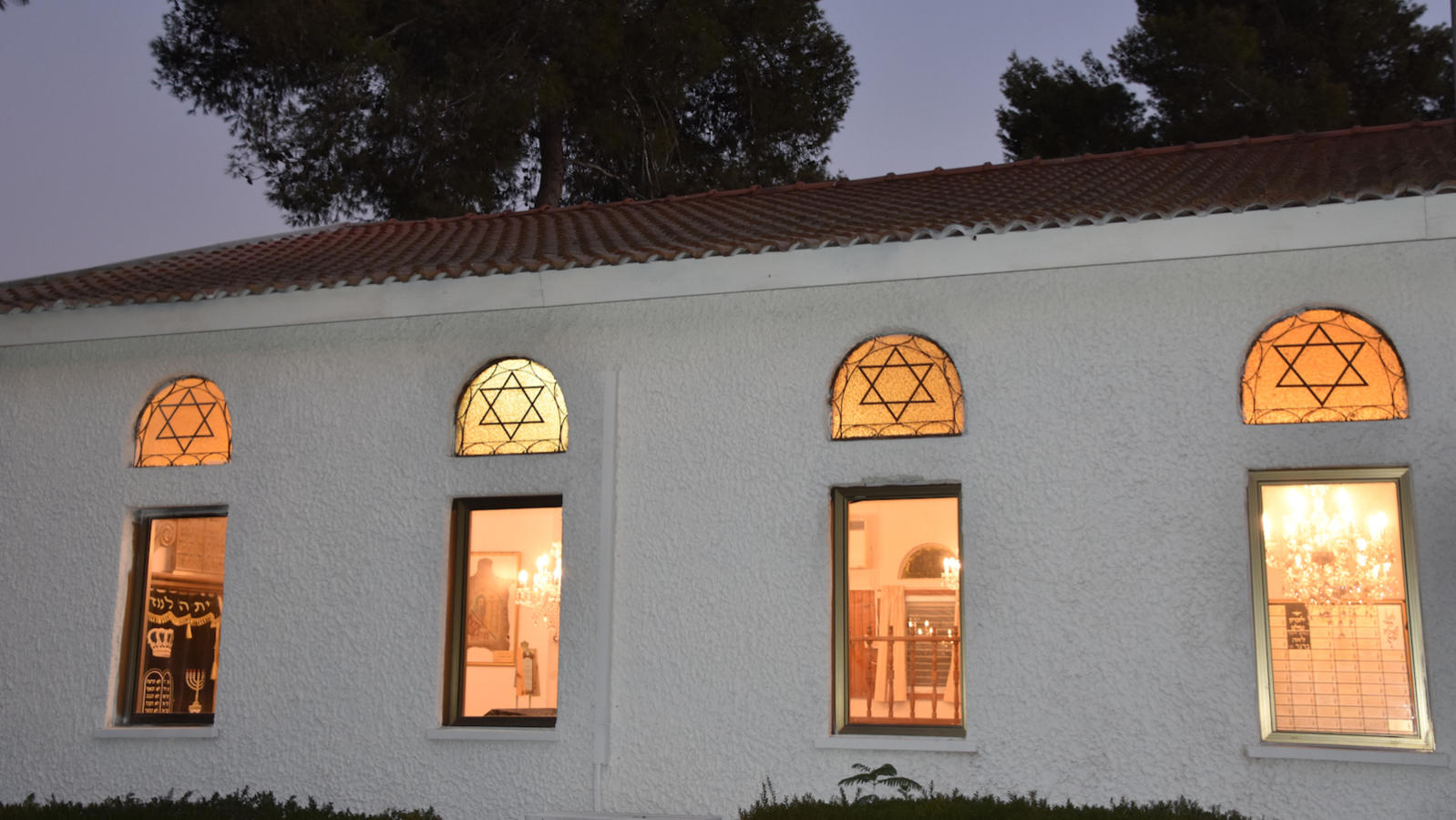 The first communal prayer service of Yom Kippur actually takes place immediately prior to sunset on the evening of Yom Kippur. This service is called Kol Nidrei (“All Vows”). These are the first words of a special legal formula that is recited at the beginning of this service and is chanted three times.

This legal ritual is believed to have developed in early medieval times as a result of persecutions against the Jews. At various times in Jewish history, Jews were forced to convert to either Christianity or Islam upon pain of death. After the danger had passed, many of these forced converts wanted to return to the Jewish community. However, this was complicated by the fact that they had been forced to swear vows of fealty to another religion. Because of the seriousness with which the Jewish tradition views verbal promises, the Kol Nidrei legal formula was developed to enable those forced converts to return and pray with the Jewish community, absolving them of the vows that they made under duress.

This ancient ceremony found a special place in the hearts of the Jewish people and has been maintained for centuries as an especially solemn and moving introduction to the holiday evening service of Yom Kippur. Kol Nidrei has no effect upon vows or promises that we make and break with other people. They still remain valid and, if broken, forgiveness and absolution must be sought from the people affected — not from God. As the Talmud teaches, “Yom Kippur does not forgive transgressions between a man and his fellow–until (or unless) he seeks forgiveness from him (directly)” (Mishnah Yoma 8:9).

Erev [the evening of] Yom Kippur is the only night of the entire Jewish calendar when a tallit (prayer shawl) is worn in the evening. As a matter of fact, it is traditional to wear a tallit or a white garment for the whole of the holiday, the color white symbolizing both our spiritual purity and our withdrawal from the vanities of this world. A white robe, called a kittel, is worn by traditionally observant men over their holiday clothes. Others may choose to wear a white item of clothing or dress completely in white.

The daytime services of Yom Kippur are characterized by their emphasis on the two major themes of forgiveness and teshuvah, or repentance. According to the traditional Jewish prayers, God forgives us for the sins that affect no one else other than our relationship with God. For sins that affect and harm others, we must first apologize and seek forgiveness from those whom we have hurt. Only then are the prayers of Yom Kippur considered effective in absolving our sins.

Teshuvah is the process by which we recognize our sins, feel regret for having committed them, and then resolve not to do them again and make restitution for any harm we may have caused. All of the major prayers of the Yom Kippur liturgy focus on these themes.

Since Yom Kippur is a fast day, there need not be any breaks for lunch or other meals. Therefore, Yom Kippur has evolved over the centuries into a full day of communal worship services, although many communities still do break for a short period before Mincha, the afternoon service. Beginning with Shachrit, the morning service, the prayers occupy themselves with the above-mentioned themes of seeking forgiveness for sin and engaging in the process of teshuvah, or repentance.

The Torah portion traditionally read on Yom Kippur morning is taken from Leviticus 16, which details the ancient biblical Yom Kippur rituals in which two goats would be selected as symbolic sacrifices.(Reform Jews instead read selections from Deuteronomy 29 and 30, as a reaffirmation of  accepting covenantal responsibility.) One would be sacrificed to God in the ancient belief that animal sacrifice could achieve divine ablution from sin, and the other goat literally became the “scapegoat” upon which the High Priest would symbolically place all the sins of the Jewish people. This scapegoat would then be sent off into the desert to a demon known as Azazel (presumably to die there), thus carrying away the sins of the people.

The Haftarah, or additional biblical reading, is taken from Isaiah 57-58, in which the prophet criticizes the empty, superficial religious rituals of the ancient Israelites when the rites are not accompanied by acts of righteousness, charity, and morality.

One of the unique aspects of the liturgy of Yom Kippur is a section of prayers called the Viddui, or confession. In these prayers, the community literally recites an alphabet of different transgressions it has committed, from A to Z (or, actually, Aleph to Tav, the first and last letters of the Hebrew alphabet). The language of the prayers, however, is instructional, for they are all in the plural; the point is that no one single person has committed all of these sins, but rather we, as a community, are collectively responsible. When reciting the lists of sins, it is traditional to gently beat on one’s breast over the heart in a symbolic act of self-remonstration.

The Musaf, or additional service, is a repetition of the main themes of the Shachrit service and includes many ancient and medieval religious poems included over the centuries to continue to heighten the spiritual experience of the day. Two unique additions to the Yom Kippur Musaf liturgy are the Martyrology and the Avodah, or worship, service.

The Martyrology is actually a long medieval poem that describes in painfully gruesome detail the deaths of famous rabbis during ancient Roman persecutions. This poem, oftentimes including additions from the time of the Holocaust, is intended to impress upon us the spiritual devotion of our ancestors, as well as to intensify the religious and emotional tenor of the day.

This is followed by the Avodah service, which refers to the rituals performed on Yom Kippur in the Temple in Jerusalem in ancient times. Basing itself on biblical precedents, the Avodah service is taken from rabbinic and talmudic sources and describes the historical highlights of the awesome and overwhelming pageantry of the priests and Levites in the Temple, with the people in attendance. The highlight of this ancient service describes how the high priest would enter the Holy of Holies, the innermost and holiest sanctuary of the Temple, to present an offering of incense and then emerge triumphantly to declare God’s acceptance of the peoples’ prayers for atonement.

Liberal movements that do not have a Musaf service include elements of the Musaf service either in the morning or in the afternoon service. Some liberal communities have also designed creative Avodah services, rather than acting out rituals that were done in the ancient Temple.

Depending upon the length of services, there may or may not be a short break in the afternoon before the Mincha service. At this service, the Torah is once again read, this time concerning the laws of forbidden marriages (Leviticus 18). (Reform Jews read Leviticus 19, “the holiness code.”) Because sexuality can and should be a vehicle for creating the divine presence in our lives, it is appropriate that such a seemingly profane topic should be read in public on Yom Kippur. The Haftarah for the Mincha service is the entire biblical book of Jonah, which deals with the theme of repentance.

The final service of Yom Kippur is the Neilah service. Neilah literally means “closing” and refers to the symbolic closing of the gates of heaven and, hence, God’s willingness to hear the prayers of the Jewish people. There is, therefore, a spiritual urgency motivating prayer at this service, as the sun is beginning to set and most people are light-headed and exhausted from the long day of fasting and praying. The highlight of this service is that, for a lengthy portion of it, the doors of the ark are opened, revealing the Torahs inside.

Whenever the doors of the ark are opened, it is customary to stand out of honor and deference to the holiness of the divine words contained in them. Since the doors of the ark are then left open throughout the lengthy last part of the service, the entire congregation is traditionally expected to remain standing for quite a while during this final, spiritually urgent prayer service. Although, it should be noted, that if this period of prolonged standing proves to be too uncomfortable or even dangerous to the health of some in the congregation, it is appropriate to sit down.

The Neilah service builds in intensity until it concludes with a final Tekiah Gedolah, or great blast of the Shofar, the ram’s horn. This blast, usually blown as soon as the stars come out, signals the conclusion of the Day of Atonement. Once they have heard the shofar, most people rush off to attend the festive and much needed “break-fast” meal immediately following services, ready to enter the new year with their spiritual batteries recharged. In many congregations, this rush is delayed by a few minutes for the recitation of Maariv, the evening prayer; because days, in Jewish tradition, begin at sundown, this actually is the Maariv prayer of the day after Yom Kippur, and is emphasized by many congregations so that the clean slate after Yom Kippur is not immediately sullied by skipping a daily prayer service.

How much do you know about the Day of Atonement?