Avodah (literally, “service”), the name for the Temple ritual, is now applied to an essential element of the Musaf service on Yom Kippur. It vividly describes the sacrificial ritual in the Temple on the Day of Atonement, based on Leviticus 16 and detailed in Mishnah Yoma(1-7) and the Talmudic tractate of the same name.

The Avodah service has preserved the quintessential rite of ancient Judaism, the most solemn moment of the Jewish year involving the holiest person (Kohen Gadol), the holiest time (Yom Kippur), and the holiest place (Temple in Jerusalem). Although not one of the pilgrimage festivals on which Jews were biblically required to appear at the Temple in Jerusalem (Deut. 16:16), on Yom Kippur huge throngs of worshipers came to see the awesome ritual and to hear the words of the Kohen Gadol.

Origins of the Service

After the destruction of the Second Temple and the cessation of the sacrificial rites, how could the people achieve atonement? The Rabbis ruled that in this emergency situation, one could perform the Temple duties by reading about them, since the utterance of a person’s lips is equivalent to the actual performance of the ritual.

In addition, the Rabbis were convinced that a yearly recitation of the Yom Kippur ritual in the Temple would give Jews a sense of historical continuity and an intense longing for the restoration of their ancient homeland. The Avodah service was initially just a narration of the Temple ritual on Yom Kippur as related in Mishnah Yoma,but during the Middle Ages, numerous piyyutim were added.

Recounting the Actions of the Kohen Gadol

On the day before Yom Kippur, the Kohen Gadol emerged and was taken to another chamber in the Temple compound, where he met with other priests and continued his study. On the Day of Atonement, the Kohen Gadol, dressed in gold-embroidered garments, conducted the daily cultic rituals. When performing the rituals exclusively associated with the sacrifices of atonement, the Kohen Gadol wore white linen vestments. During the course of the day, he immersed himself and changed his clothes five times and washed his hands and feet 10 times.

The Kohen Gadol first offered a bull as his personal sin offering. He confessed his sins and those of his family, then the sins of the tribe of Aaron (the Kohanim), and finally those of all Israel (Lev. 16:17). Every time the Kohen Gadol uttered the holy name of God (the Tetragrammaton), which was spoken only on Yom Kippur, the people prostrated themselves and responded: “Praised is His name, whose glorious kingdom is forever and ever.”

It remains a custom in some communities for worshipers to completely bow down on the floor of the synagogue when this part of the Avodah service is read. A cloth or piece of paper must be placed between one’s head and the floor (not between one’s knees and the floor, as many erroneously do), because it is forbidden to bow down on a stone floor, except in the Temple.

After drawing lots to determine which of the two male goats was sent off to the wilderness for Azazel and which would be sacrificed as a sin offering for the Lord, and after a special incense offering was made in the Holy of Holies, the Kohen Gadol recited a prayer that Israel be blessed with peace, prosperity, and fertility and that no earthquake harm the inhabitants of the Sharon plain (“their houses may not become their graves”). Some modern prayer books used in liberal congregations have minimized the references to sacrifice and either a bridge the Avodah or make it optional. 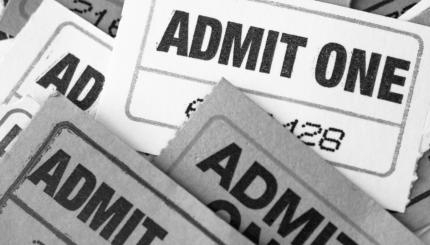 The Lowdown on High Holiday Tickets

Why many synagogues are "pay to pray" -- and options for those on a budget.