A quick guide to items commonly found in a synagogue sanctuary.

Looking around the synagogue you will see the eastern wall, where the aron ha-kodesh (the holy ark) is located. The ark is the repository for the Torah scrolls when they are not in use. It also serves as the focus for one’s prayers. Above the ark is located the ner tamid–the eternal light — recalling the eternal light in the Temple (Exodus 27:20–21).

Note: This article describes the basic floor plan of a synagogue. The layout varies greatly from place to place, so this article of necessity employs generalities that are not true for all synagogues. In addition to the synagogue “parts” described below, one distinguishing factor in Orthodox synagogues is the mechitzah – – a curtain or other divider that separates men and women; in some Orthodox synagogues, women sit in an upstairs balcony, so there is no actual mechitzah.

Arks can be decorated in innumerable ways and come in many different sizes, shapes, and materials. The central part of the ark is a cabinet that contains the Torah scrolls. This usually has a parochet — curtain — covering it. (Many Sephardic shuls do not have a parochet.) The parochet is often elaborately designed with many embellishments; some shuls have a special white parochet used only for the High Holidays. Because the parochet is considered holy, it is treated like any holy object–e.g., books, Torah scrolls, etc.–and is never discarded. [Instead, it is buried when no longer used.]

When the parokhet is drawn aside, you will see (in most shuls) the doors to the ark, which are, again, often elaborately decorated. Opening the doors, you will see a cabinet usually lined in velvet where the Sifrei Torah–the Torah scrolls–rest. Many shuls have large numbers of scrolls donated by people to commemorate an event or to memorialize or honor a person, so to accommodate all the Sifrei Torah, the ark will sometimes have more than one “shelf.”

The Torah scrolls themselves are covered by cloth mantles (covers) elaborately designed on the front. These mantles are open at the bottom and closed at the top except for the two openings that enclose the rollers. This and the other objects described below are considered holy and, once again, are never discarded when worn out. Often there are a number of other objects decorating the Torah. These can include:

1. Keter or atarah: Crown of silver on top of the Torah; this emphasizes that the “Torah is a crown for Israel.”

2. Rimonim: Finials–separate decorative objects adorning the tops of the rollers, often in the shape of pomegranates.

3. Tas: Breastplate or silver shield hanging over the front of the Torah (reminiscent of the breastplate of the high priest in the Temple).

These objects can be very ornate and come in many different styles. Since Sephardic Jews keep their Torah inside a wooden case, often covered with silver, they do not use a cloth cover. Interestingly enough, they also read from the Torah without removing it from this case.

If all these decorative coverings were removed, we would find the sash or buckle that keeps the Torah rollers clasped together tightly. It, too, is often decorated with elaborate care. if this sash were removed, we could unroll the Torah scroll.

The Torah is handwritten by a trained scribe on parchment made from a kosher animal. The Torah has to be written with no mistakes; the letters must be clear, the writing must not be faded. if there is something wrong with the Torah it cannot be used until it is repaired by a scribe.

The Torah is read using a yad, a metal or wooden pointer used by the Torah reader to help him/her keep the place as s/he reads from the scroll (it is not permissible to touch the Torah — i.e., the parchment–itself with one’s hand).

In old-style traditional shuls, the ark is not set on a stage, though in most of the newer shuls it is. Similarly in some traditional shuls the amud — where the hazzan [prayer leader, or cantor] davens [prays] — is flat on the ground.… However, in many shuls today there is a stage in the front of the room on which there is the ark, the desk from which the hazzan prays (often facing the congregation), the place from where the Torah is read (often the same as the hazzan’s desk), chairs for the rabbi, president, other shul officers, and a stand from which the rabbi speaks. (It is customary for the bar/bat mitzvah to sit up front also.) In more traditional shuls there is a stage which holds the ark, a stand from which the rabbi speaks, chairs for the rabbi, etc. Somewhere at the base of the stage is an amud, which faces the ark.

In the middle of these traditional shuls there is a bimah– – a platform holding a reader’s table facing the ark. This table is used for reading the Torah and provides a central place from which the hazzan can occasionally pray. Wherever the reading table is, whether in front or middle, it is covered by a mappah — embroidered cloth — so the Torah does not rest on plain wood while being read.

The bimah might also have holders for the Torah and crown ornaments, etc. In the less traditional shuls similar objects will be near the reader’s desk on the podium. There are all sorts of in-between geographic positions, based on the traditions of the shul. At one time [and today in many Orthodox synagogues] the Torah was read from the middle of the shul so that people could hear it wherever they were seated. The hazzan would pray at the front to be near ark — the symbol of God’s presence in the synagogue. Recent innovations such as the microphone [used only in non-Orthodox shuls, as traditional Jewish law prevents its use on Shabbat and festivals] have changed the way some synagogues are built. Also, some synagogues have turned the hazzan and/or Torah reader around to face the congregation rather than the ark.

Pronounced: muh-KHEETZ-uh, Origin: Hebrew, a partition or divider separating men and women during prayer services and other programs in an Orthodox synagogue.

Pronounced: YAHD, Origin: Hebrew, literally “hand,” this is also the pointer used in synagogue to indicate the section of the Torah or biblical text that is being read or chanted. 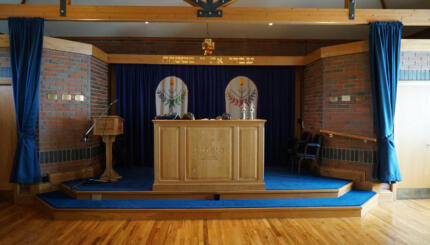 What Is A Bimah?

The focal point of the synagogue sanctuary.