Rosh Hashanah, the Jewish New Year, is a time when Jews celebrate the good things they have experienced in the previous year, and also when they reflect on hopes and dreams for the coming year. But Rosh Hashanah is not only festive; it is also a solemn time, a prelude to Yom Kippur, the Day of Judgment. Rosh Hashanah inaugurates the Days of Awe, ten days during which Jews reflect on their conduct, make amends for past wrongs, and set themselves to do better in the coming year. The symbols of Rosh Hashanah — shofar, apples and honey, round challah with raisins, and pomegranates — reflect these different layers of the holiday.

Shofar: On Rosh Hashanah, Jews blow a shofar, a ram’s horn, to announce the new year. Although the shofar is blown at other times (including at the end of the fast on Yom Kippur), and was blown much more regularly in antiquity, the image is now closely tied to Rosh Hashanah. The shofar is blown in synagogue during the holiday.

When is Rosh Hashanah 2023? Click here to find out.

Apples and Honey: Jews also dip apples in honey on Rosh Hashanah in order to wish for a sweet New Year. The practice probably dates to medieval France, as this was a time when the apples in that region were particularly sweet. Apples and honey are also one of the most recognizable symbols of Rosh Hashanah.

Round Challah with Raisins: Traditionally, Jews bake their challahs for Rosh Hashanah in a round shape to represent the circularity of the calendar. They are studded with raisins for a sweet new year.

Pomegranates: This flower-shaped red fruit packed with ruby seeds is also closely associated with Rosh Hashanah. There is a custom of eating a new fruit (or, at least, a fruit one has not tasted in a long time) on the second night of Rosh Hashanah, and often that fruit is pomegranate, which has a short season. The pomegranate is also a symbol of Rosh Hashanah because the abundance of seeds seeds can represent prosperity or a desire to perform many mitzvahs (commandments) in the coming year.

When is Rosh Hashanah this year? 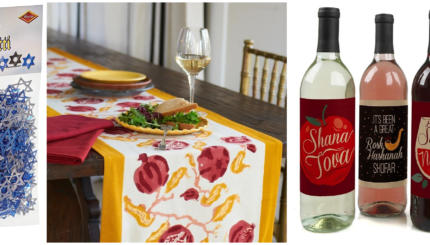