Today we dive into Tractate Megillah, the 11th in our Daf Yomi journey. As we approach the end of Seder Moed, the second section of the Talmud dealing with the laws of holidays, the tractates will continue to shrink. Megillah is just 32 pages. The last two, Moed Katan and Chagigah, clock in at 29 and 27 pages respectively to round out this seder. Midway through this tractate we will also celebrate the two year anniversary of this cycle of Daf Yomi study.

As the name suggests, Tractate Megillah deals with the laws of reading the megillah on Purim. It also describes the laws governing public Torah readings in synagogue on Shabbat as well as Monday and Thursday. These latter two were market days in antiquity, a great time to gather people in the town square for a little public learning of scripture.

It turns out that in a premodern agricultural society, where many people were farmers and shepherds living on large tracts of land, gathering people for a public reading posed a significant logistical challenge. Nonetheless, hearing the megillah was a primary mitzvah of Purim(tomorrow we’ll learn just how important), so the mishnah offers some accommodations:

Let’s back up a moment. Esther 9:19–22 makes it clear that Purim is celebrated on the 14th of Adar in rural, unwalled settlements and on the 15th in cities that were walled in the time of Joshua. (The reason for this is also addressed on today’s page, but we don’t have time to discuss it here.) So why would the mishnah allow for a public megillah reading on the 11th, 12th or 13th?

The reason is to allow people to read megillah on market day, either Monday or Thursday. If the 14th of Adar falls on a market day, the villagers are in luck! They read megillah while they are at market. But if the 14th of Adar falls on a Sunday, the villagers can read megillah on the Thursday before — the 11th of the month — when they are already assembled. In the Gemara, Rabbi Yohanan finds midrashic proof of this idea in Esther 9:31: “These days of Purim shall be observed at their proper times …” It does not say “in their proper time” (singular) but “times” (plural) — a hint that more than one day was considered acceptable for megillah reading.

The Gemara then further parses this midrash to mean that just two additional days are allowed for megillah reading, which creates another problem. Since Esther indicates that Purim is celebrated on the 14th and 15th, an additional two days would only give us permission to read on the 12th and 13th. How do we know that the 11th is permitted as well? “The mishnah said so” doesn’t cut it. The rabbis want scriptural proof.

Rav Shmuel bar Yitzhak comes to the rescue, noting that since the 13th of Adar was also crucial to the Purim story, the day when the Jews assembled to fight off their enemies (the word “assembled” is the interpretive linchpin here), it is also a sanctioned day for reading megillah. This means that Esther itself authorizes the 13th, 14th and 15th of Adar as primary megillah reading days, plus two more flex days (on the basis of “at their proper times”), allowing us to bump out permission for megillah reading all the way back to the 11th.

It’s worth noting that while the mishnah is utterly clear about the reason the megillah is read early in some years (to match the marketing schedule), the Gemara demands a better reason. It does not want to concede that the practice is done to convenience people (though of course elsewhere we have seen the rabbis rule leniently for exactly that reason). Instead, it wants scriptural proof.

You’re probably thinking: But we don’t do this today. We read megillah on the 14th or, if we live in a city like Jerusalem that was walled in the time of Joshua, on the 15th. Why is the Gemara going to all this trouble to tell us that we can read megillah on the 11th if that’s not actually the case?

Turns out, the Gemara answers that question, too:

Rabbi Yehuda said: At a time when the years are established properly and the Jewish people dwell securely in their own land (one may read megillah as early as the 11th of Adar). However, nowadays, since people look to (megillah reading to calculate when Passover begins) one may read it only in its designated time.

In Rabbi Yehuda’s day, aside from publicizing and commemorating the miracle of Purim, megillah reading had another very important function: signaling that Passover was coming in exactly one month’s time. Messing with the date might lead people to celebrate Passover at the wrong time, a risk that could not be taken! Though Rabbi Yehuda imagines a future when the Jews are gathered back to their ancestral homeland, the calendar is easily known and communicated, and therefore while megillah reading can be done earlier, in his time it was not permitted.

More on this and other debates about Purim and public readings coming soon! Stay tuned.

Read all of Megillah 2 on Sefaria.

This piece originally appeared in a My Jewish Learning Daf Yomi email newsletter sent on December 14th, 2021. If you are interested in receiving the newsletter, sign up here. 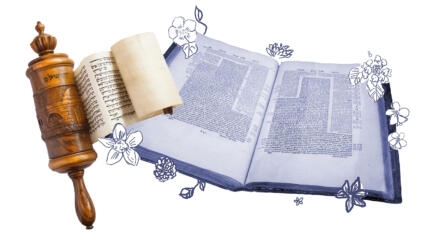 This talmudic tractate covers Purim, reading the Torah and more.

Shushan Purim is the day when residents of walled cities, like Jerusalem, observe the holiday.