Sukkot is a joyous holiday celebrating the fall harvest. The booths (called sukkahs) that Jews build during this week-long festival are reminiscent of the booths ancient farmers used to sleep right in their fields during harvest season. They also commemorate the 40 year period during which the Israelites wandered in the wilderness, sleeping in tents. Part of Sukkot is spent in synagogue at prayer, and much of it is spent eating, drinking, sleeping, and generally dwelling in the sukkah. But wherever you happen to meet people during this particularly joyous holiday, it’s nice to know how to greet then.

Here are some ways you can greet someone on Sukkot: 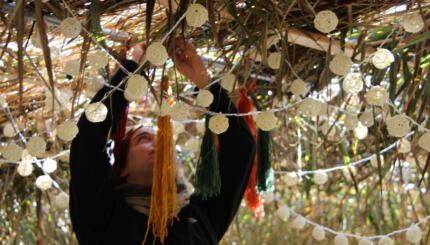 Beginning five days after Yom Kippur, Sukkot is named after the booths or huts (sukkot in Hebrew) in which Jews are supposed to dwell during this week-long celebration.