Question: I was baking challah with a friend, and before we put the challah in the oven she took off a small piece of dough, wrapped it in foil, and threw it in the bottom of the oven. She said it was called “taking challah.” What does it mean to take challah, and where does this tradition come from?

For a variety of challah recipes, ranging from Honey Whole Wheat to Double Chocolate Chip to Gluten-Free, go to The Nosher, MyJewishLearning’s lively food blog. Or try this traditional challah recipe.

Answer: I know “Taking Challah” sounds like the title of a bread-themed caper film, but actually it’s a commandment that appears in the Torah, still practiced in Jewish kitchens around the world.

In observance of this mitzvah, when the people entered the land of Israel, anyone who baked bread was obligated to give a portion of their dough to the kohanim (priests) who worked in the Temple. This dough was part of the salary of the priests, who essentially functioned as public servants doing the Temple work, as well as Divine conduits.

Today there is no Temple  in Jerusalem. But this practice of “taking challah” (in Hebrew, hafrashat challah) is still around. Instead of bringing dough to the kohanim, though, we separate a small piece of dough — about the size of an olive — and either burn it or dispose of it respectfully, rendering inedible the portion that God commanded be set aside.

There are a whole host of rules about when one should take challah — it is typically done only when making a large batch of dough, using over 10 cups of flour. It should be done when one bakes a large batch of any kind of bread, not just challah bread. If one is using more than 14 cups of flour, there is a blessing to say immediately before taking challah.

(You can learn more about the mechanics of taking challah here).

Traditionally, taking challah is a mitzvah that has been associated with women. Some say this is because women have typically been the ones in the kitchen, cooking in keeping with Judaism’s dietary laws. Others trace the connection between women and taking challah to the first Jewish woman, Sarah. When Abraham welcomes the traveling angels in Genesis 18 he prepares a large feast for them, but instructs Sarah to bake the bread: “Quick, get three seah of choice flour! Knead and make cakes!” From this and other passages the rabbis of the Talmud explain that taking challah is one of the three mitzvot set aside specifically for women, along with lighting Shabbat candles , and observing the rules of menstrual purity. (That said, it’s perfectly fine for a man who is baking to take challah.)

Talking so much about taking challah is really making me hungry. I better get baking!

For a variety of challah recipes, ranging from Honey Whole Wheat to Double Chocolate Chip to Gluten-Free, go to The Nosher, MyJewishLearning’s lively food blog. Or click here for a traditional challah recipe.

What works for saying the blessings and "taking challah"?

All about the braided Sabbath bread. 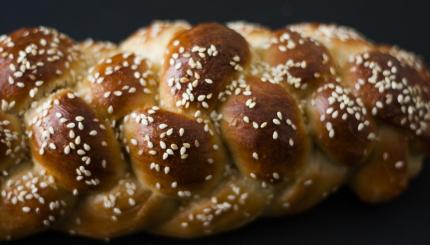