A kohen (also spelled cohen or kohan) is a descendant of the sons of Aaron who served as priests in the Temple in Jerusalem.

Traditionally, kohanim (the plural of kohen) get special honors in synagogue, but also are subject to certain restrictions. Like Levites, who are descendants of the priests’ assistants and also singled out for certain honors, kohanim are descendants of the tribe of Levi. Many people with the surname Cohen, Kahn, Katz (and their various spellings) are kohanim, and many with the surname Levi or Levy are Levites.

A genetic study in 1997 determined that large numbers of people who believe they are kohanim, whether they are Ashkenazi or Sephardic, share a group of markers on the Y chromosome. To find out how to be tested for this gene, contact the Center for Kohanim in Jerusalem.

Traditionally, only a man can be a kohen, and the status is transmitted from a father to his son. The daughter of a kohen traditionally has special obligations and privileges, but these last only until she marries – and she does not pass these down to her own children. In some egalitarian congregations, the daughters of a kohen continue to be called for special honors even after she marries. Few Reform congregations observe the kohen traditions, and not all Conservative ones do.

Among the special honors kohanim receive: They are given the first aliyah (being called to the Torah) when the Torah is read in synagogue, and during some services they reenact the giving of the priestly blessing.

Kohanim are also recognized at the Pidyon HaBen ceremony. In the Bible God commands the Israelites that once they arrive in the land of Canaan, they must “redeem every first-born male among your children” (Exodus 13:13). A child is redeemed at the age of 31 days when his parents pay the modern equivalent of five shekels — via coins or, in some traditions, objects of value — to a kohen.

READ: Buying My Son from a Priest for a Few Silver Coins

According to Jewish law (Leviticus 21:7), a kohen is restricted from marrying a woman who has converted to Judaism, or a woman who has been divorced. Different communities have different levels of adherence to this law. It is still practiced by Orthodox communities, and some Conservative communities, but rabbinic authorities sometimes make exceptions.

Jewish law (Leviticus 21:1) also forbids a kohen from having contact with corpses, other than those of close family members. This means that a kohen might avoid entering a cemetery, or attending a funeral unless it is for a close relative (mother/father, sister/brother, son/daughter, spouse). Some kohanim are especially careful about this rule, and may even avoid entering a museum that contains mummies.

Since kohen status cannot be proven (although widespread DNA testing may eventually change that), synagogues giving special honors to kohanim rely on individuals to identify themselves. 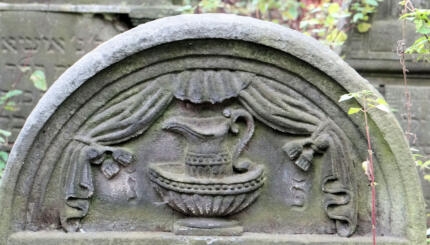 Even after the Temple's destruction, Levites enjoy some unique ritual privileges.

How the Priestly Blessing is manifested within the community's needs.