The underpinnings of Hanukkah differ from those of the other Jewish holidays, because the origins of Hanukkah and the development of its practices are not drawn from the Bible and are only given slight mention in the Mishnah. The first notable mention of Hanukkah appears circa the sixth century CE in the Gemara with this question: What is Hanukkah (Shabbat 21b)?

Most likely, the question is rhetorical. We can surmise that the sages were already aware of Hanukkah, because its story was widely circulated within sources known to Jews. The talmudic Rabbis would have been familiar with the Books of the Maccabees, which we generally consider the primary historical sources for the story of Hanukkah. These are found in the “deuterocanonical” books, most of which are in a fifth century CE collection called Apocrypha.

Although such books are not part of the canonized Hebrew Bible (the Tanakh), they were popular among Jews and early Christians and were set in the biblical canon of the Catholic Church, as well as the canons of Ethiopian, Oriental, and Eastern Orthodox churches.

Centuries earlier, however, the Books of the Maccabees had been part of the first Greek translation of what was then described as the Hebrew Bible. This translation was called the Septuagint (literally “The Seventy”), and the story of its origin comes from a legend found in the fictional “Letter of Aristeas.” Retold by Philo of Alexandria, the first century CE, assimilated Jewish philosopher, the legend saysthat the Greek king of Egypt in the third century BCE requested a Greek translation of the Bible for the magnificent library of Alexandria.

The High Priest of the Jews commissioned six members from each of the Twelve Tribes of Israel, for a total of 72 (not 70, but close!) who were taken to Alexandria and placed in separate chambers.

Therein they transcribed their own translations. After exactly 72 days, each of the translators emerged with an identical translation of the Torah. This legend served to affirm the validity and sacred status of the books of the Septuagint as a legitimate Bible. A version of this legend would later appear in the Talmud itself (Megillah 9a-b).

The process of translating the remaining books of the Hebrew Bible (different in totality from today’s Tanakh) into Greek continued gradually. Some of the newer books that were selected for inclusion, such as the Books of the Maccabees, were written centuries after the initial translation and often composed in Greek. These were placed in a separate category within the Septuagint called Anagignoskomena.

Within the Septuagint, there are four Books of the Maccabees. The first two of them, each written around the start of the second century BCE, provide parallel accounts of the Maccabean history, spanning from approximately 180 BCE to 160 BCE. The Third Book of the Maccabees has nothing to do with the Maccabees and tells instead of an earlier Jewish persecution, under the ruling Ptolemy dynasty in Egypt, from 222 to 205 BCE. The Fourth Book of the Maccabees (circa 1st century C.E.), is about the Hanukkah story and Jewish martyrdom but seems to be a completely independent work from the other books in both style and philosophy.

The Book of Judith is a well-known deuterocanonical book in the Apocrypha that is related to Hanukkah. During the medieval period, especially after the ninth century, it became customary to recount this story during the holiday, even though it has no direct relation to the Maccabees or to the rededication of the Temple. The setting and details, in fact, vary by storyteller and by era in which the story has been told.

Judith (Yehudit, literally “Jewess” in Hebrew) is a wealthy, pious and beautiful widow from a time earlier than the Maccabees. In one version, after the Assyrian general Holofernes besieges a town in Israel, Judith single-handedly infiltrates the army encampment and, with her beguiling and seductive powers, succeeds in reaching the general’s tent. She plies Holofernes with wine, and he soon dozes off. Judith seizes this opportunity to behead him. The Israelites are then able to defeat the invaders.

In several other biblical or apocryphal stories and proverbs of the same era, beautiful, non-Jewish, enemy women arc depicted as a danger to the Jewish people, for example, the notorious Delilah. Judith, however, is made into a heroine of Jewish redemption. The plot and theme of her story closely mirror that of an Israelite woman named Jael in the biblical Book of Judges.

During a time of war, Jael serves milk to the Canaanite general Sisera, who subsequently falls asleep. She then kills him by driving a tent pin through his head. Her action is followed by the Israelites’ victory in battle. Most scholars identify the Book of Judith as fiction, perhaps because it is a copy of the biblical story of Jael. But whether fact or fiction, the Book of Judith conveys an historical portrait of the ancient Near East and thus provides valuable insights into the story and meaning of Hanukkah.

Perhaps of most significance to Hanukkah is the account written by the first century CE author Josephus, an aristocratic Greek Jew known also as the Roman citizen “Flavius Josephus.” As a military leader of the Jewish soldiers and later as an agent of the Romans, he was an eyewitness to the first Jewish-Roman war (66-73 CE) and to the destruction of the Second Temple (70 CE). The transition in his allegiance had occurred following a siege in the Galilee, when Josephus surrendered to Rome rather than commit suicide with his compatriots.

Afterwards, he served two Roman generals as an informer and negotiator. Despite being regarded as a traitor to his people, he remained a loyal and law-observant Jew in his own eyes and those of most Rabbinical commentators. The works of Flavius Josephus, particularly The Antiquities of the Jews and The War of the Jews, are some of the only surviving historical material from that time and place. They provide invaluable records of Jewish history and practice, including an account of the Maccabean revolt. 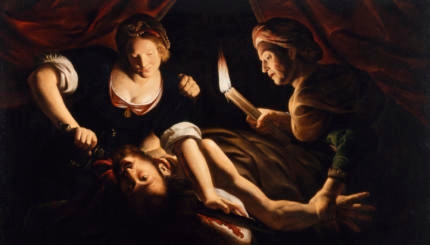 Two stories related to Hanukkah focus on the heroic efforts of women.