These Chocolate Crepes Are Perfect for Passover

Keeping a chametz-free diet during Passover can be challenging for health-minded folks, especially for Ashkenazi Jews like me who try to avoid eating meat and other animal products. While life became a little easier for some of us in 2015, after the Conservative movement lifted the ban on kitniyot (the stuff that isn’t chametz but kind of looks like it), the Passover meals of Ashkenazi Jews across the country are still heavy on the brisket. In short: I end up eating a lot of salad.

Earlier this week, I suddenly got a craving for Ethiopian food, my favorite cuisine in the entire world, with its numerous flavorful veggie dishes like shiro wat (chickpeas), misir wat (lentils), tikel gomen (cabbage and potatoes), and gomen (collard greens). All delicious, all kosher for Passover! But wait, what about injera, the spongy, slightly sour bread that you use to transfer the food to your mouth? It’s flat, so that means it’s k-for-P, right?

I texted my colleague Bezawit, who was born and raised in Ethiopia, to confirm this. “No it is not,” she replied. “Why not?” I wrote back. “Because it is not.”

This was not a satisfactory answer to me. Some quick internet research proved inconclusive, so I reached out to my Jewish social network, both in San Francisco and online. Rabbi Landau, a local Orthodox rabbi, told me that observant Ashkenazi Jews don’t use teff, the flour from which injera is made, during Passover. Teff isn’t one of the five forbidden grains—wheat, barley, rye, oats, and spelt—but it is considered kitniyot, he said.

Fine, but is injera acceptable for those of us who eat kitniyot? For more answers, I posted on Facebook, which, it turns out, is actually good for something. My friend Sarah, a rabbi in Beverly Hills, wrote back: “The [Orthodox Union] considers it kitniyot. Others classify it as a seed along the lines of quinoa. Either way, under your parameters, you’re good to go as long as you can ensure that it’s wheat-free.” My mouth started watering as I envisioned a delicious Ethiopian feast at one of the many local Bay Area restaurants.

However, as my friend Jayme pointed out, injera served in American restaurants is often made from a mixture of teff and other flour, like wheat or barley. This is because teff is both expensive and more difficult to work with than regular flour. “If you can confirm that it’s 100% teff (or cut with, say, corn flour), and you eat kitniyot, that should be okay,” Jayme wrote. My friend Tali, an Ethiopian Israeli psychologist, chimed in that Ethiopians in Israel don’t even eat injera during Passover. “[The prohibition] has to do with the process of making it, not only the ingredients,” she wrote, adding: “I miss eating it!” (Apparently it’s a multi-day process involving heating and cooling—and yeast. In other words, it’s leavened bread.)

So no Ethiopian feast with injera for me. But all of this got me thinking: Is teff matzah a thing? According to Avishai, an Ethiopian Israeli filmmaker based in New York, Ethiopian Jews used to make their own matzah, called kita in Amharic, before being introduced to Western-style matzah. (In Ethiopia, Passover is known as kita beal, or “holiday of the hard bread.”) They used wheat, though, not teff. “It’s very dry, and I remember we used to eat it with a lot of good things to make it more tasty,” Avishai explained.

Inspired by my research, and mindful of the cultural appropriation debate surrounding kitniyot, I decided to make some teff matzah. It was not difficult, even for this Blue Apron chef. I mixed some teff flour (purchased at a local specialty food store) and water in a bowl, rolled the dough into pancakes, and threw them into a really hot oven. Eighteen minutes later, give or take, I had fresh teff matzah.

It looked darker than regular matzah. How did it taste? Reactions in Be’chol Lashon’s San Francisco office were mixed. “It tastes like slavery,” said one unimpressed team member. Bezawit, my Ethiopian colleague, refused to even taste it, fearing I was trying to poison her. One team member actually liked it: “It tastes better than regular matzah to me,” he said. “It’s toastier.”

As for me, learning about teff and making something new was a lot more fun than eating the final product. 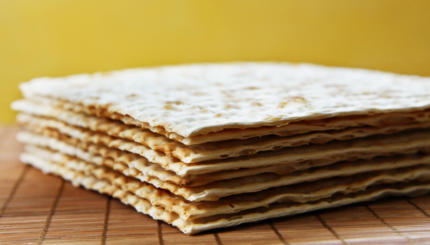 What should Celiac sufferers eat during Passover?