The Genesis of “The Jewish Furrier” in “The Prince of Tides”

“The belief is that poetry is about rhythm and sound, it is a kind of a heartbeat, has a human physiological element to it that transcends meaning and in that way can be a unifying force. You don’t have to understand a language to hear a poem read to feel it and be moved by it,” explains poet Justin Marks.

Marks is one of the organizers of Xenotheque, a multi-language poetry reading that will be held on January 17 both in New Orleans and Brooklyn. The event is an experiment in language, community and poetry. Contrary to the common assumption that different languages are a barrier to connection, the event aims to show that the music and rhythm of language can reach well beyond literal meaning to create deep ties across differences.

The idea for Xenotheque originated in New Orleans with artist Emily Farranto, a friend of Marks’ from college. Marks is spearheading the Brooklyn event and says he expects 15 presenters to share poems in as many or more languages.

Aliya Mariane Bertout, who is Jewish like Marks, was born in Gabon and will read in French. She describes poetry as “freedom of expression at its best, coming straight from the heart to the pen or to the tongue.” She continues: “By reading or listening to those strange strings of words, sometimes melodic, sometimes brutal, you uncover the feelings of the author and the universality of it, regardless of the time, of the place, or by whom it was written. It is music you can share with words.”

Bertout connected with Xenotheque through Be’chol Lashon, which is co-hosting the Brooklyn event. According to Julian Voloj, the organization’s director of development and strategic planning, “Be’chol Lashon literally means ‘in every language,’ and this evening provides a chance to showcase the global nature of Jewish experience and culture. We will not only celebrate the many languages Jews have spoken as they have lived and connected with cultures around the world, but also highlight some of the unique Jewish languages, like Ladino and Yiddish.” Voloj himself will read poetry in his native language of German.


Haftam Yizhak-Heathwood is an Ethiopian Israeli who will be reading in Hebrew and Amharic. In choosing a Hebrew poem that speaks about the soul, she has found that “it has turned into a way for me to express myself.”

For reader Jane Mushabac, participating in Xenotheque is part of a broader commitment to language and identity. Growing up, Mushabac spoke exclusively English because her Ladino-speaking immigrant parents were convinced by others this was the best way to raise children in New York. With time, her curiosity about the ‘Spanish’ her parents spoke grew. She learned Ladino alongside its music and culture and became an advocate for Ladino and taking to writing in it herself.

Teaching creative writing at the City University of New York, she often has more than a dozen languages represented in her classrooms. She knows the power of language for her students, saying, “Of course they, like most immigrants, want to assimilate. But reaching back to the languages intertwined in their childhoods and ongoing family emotions became a great way of launching their writing of fiction and poetry.”

Xenotheque will bring together poetry lovers and novices for a night celebrating cultures and communities from around the world. If you have a favorite poem in a language other than English, come and share it at Berl’s Poetry Shop on January 17. Everyone is welcome. Click here for more info about the event. 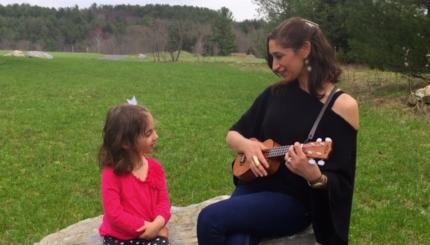 It was not until she was already on her way to adulthood, that singer Sarah Aroeste discovered the connection between ...

Arabic was the spoken and written tongue of the Jews in the medieval Muslim empire, a fact that encouraged cultural exchange and the development of new forms for Hebrew poetry.