How Jewish and Mexican Breads Connect Me to My Mixed Heritage

The Secret Jewish History of Cassoulet

They say, in the end, “history is destiny.” A recent trip to the supermarket reminded me just how true this is.

I am the daughter of German Jewish immigrants who proudly embraced their new, foreign land when they arrived in New York in 1946. My grandmother, Frau Becker, from Leipzig, Germany, traveled by ship with her family in the aftermath of World War II. She arrived with little more than the clothes on her back — and a few treasured  artifacts to remind her of home, including a trove of recipes. One of which, penned in a careful German cursive script, was for spaetzle.

Spaetzle, a type of small noodle or dumpling made with fresh eggs, was always accorded a special place at my grandmother’s rectangular wooden table. The preparation of food was such a pre-eminent event in our family, and she made it from scratch, stretched out on a white linen cloth. My mother told me:

“Deine Oma wird jetzt spätzle Machen. Schau dir an, wie sie es macht, damit du weiBt, wie.” (Your grandmother is going to make spaetzle now. Look at how she makes it so that you know how.)

“Bestimmt” (certainly) I replied, although my 8-year-old mind was more focused on the annoying antics of a young male cousin who was taking the head off my Barbie doll.

I watched my grandmother roll out the spaetzle dough so that it was approximately a half-inch thick, switching seamlessly between French and German as she instructed her children to pay attention to her efforts so that, someday, the dish could be replicated for future generations. Spaetzle was often accompanied by bratwurst or wienerschnitzel, and the adults all drank schnapps with the meal. For a family who’d had more than their share of hardships — my mother and her siblings had hidden in convents, monasteries and farms in the French countryside while most of their extended family perished in the Holocaust – sharing food was a unifying force. But it was mostly German cuisine. As a young child, I craved the things I saw my American counterparts eating: hamburgers, pizza, hot dogs, though none of these ever passed through our doors.

Once I left home for college, my German heritage took a backseat to my burgeoning American identity. While I occasionally found myself thinking in my family’s native tongue, it wasn’t until my late 20s that I accepted that one could not escape one’s history. That despite my attempts to become as American as apple pie, my German roots had shaped me into someone else. And no one represented those roots more than my grandmother.

By this time, my grandmother had passed away from cancer at age 81, surrounded by her family in Los Angeles. Shortly after her death, my cousin sent me a selection of photos of her. Studying them provoked a sudden urge to learn more about her. Through stories, my mother taught me of her lively intelligence and humble demeanor. That, among her many virtues, she was well-known as an excellent cook.

On a recent trip to the supermarket, history clapped back at me when my eye alighted on a box of spaetzle in the pasta aisle. With an emotional jolt, I realized that I hadn’t thought about it since I left home for college at 19. I purchased the box, but on the ride home I suddenly heard my grandmother’s accented voice reminding me that real spaetzle is a dish you make yourself.

Once home, I put the box in the cupboard with a guilty conscience, and began to look for my grandmother’s old recipe, lettered in her German cursive script. The ingredients were simple enough: flour, egg and a bit of milk mixed into a pancake-batter-like consistency. Dropping little lumps of the batter into some salted boiling water then ensued. When the lumps finally took form, plumping up into particulate morsels, I drained off the hot water, forcing myself to wait for them to cool before digging in. The first bite reconnected me to my childhood — to the tastes of my bubbe’s kitchen, and the sounds of immigrants talking in their native languages, their home a refuge in this strange, new land.

The box of spaetzle I bought, which I know I will never use, still sits high upon a kitchen shelf, recalling the architecture of a former life. It reminds me that each of us is knit of an infinite fabric of previous histories; that I cannot separate my identity from my past, but can reside happily in my European and American worlds. When my son nearly trips on a street curb while alighting from our car, the word “Vorsichtig!” (Watch out!) suddenly issues from my throat. I tell him my own stories about the great-grandmother he never knew, who poured love and soul into her food, so that her story is not forgotten. The word “spaetzle” is now a part of his vocabulary, and one day he will make that delicacy, with his bubbe’s blessing, on his own. 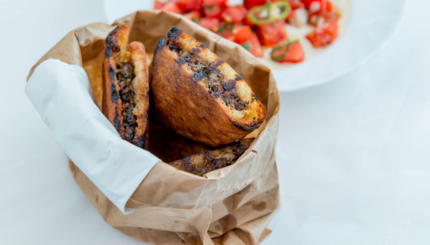 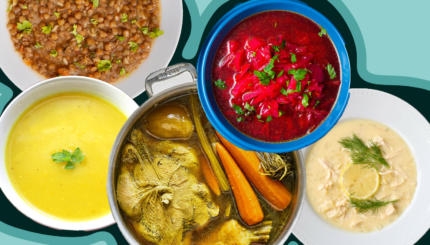