Gastronomically speaking, you might say that it was Hanukkah all year round in the Roman Ghetto–the enforced, segregated area where Rome's Jewish community lived from the 16th-19th century.

As a result, oily dishes like carciofi alla Guidia (fried artichokes), fritto misto (fried mixed vegetables), and filetti di baccala (fried cod filets) were commonplace throughout the year, not only in celebration of the Maccabees' miraculous Hanukkah lamp.

When Hanukkah arrived, however, neither of the traditional fried dishes familiar to American Jews–latkes and sufganiyot–were on the menu. Instead, Roman Jews celebrated the festival of lights with lemony fried chicken and torzelli, a savory side dish made of curly endive that is battered and deep-fried. Curly endive (sometimes labeled frisee or chicory in grocery stores) comes into peak season during the cold winter months–not coincidentally, right around Hanukkah. Those thrifty-by-necessity Roman Jews understood that seasonal cooking equaled economical cooking.

Dredged in flour and slipped into sizzling oil, torzelli adds a touch of much-needed bite and freshness to the winter table. And brightened with salt and lemon zest, it boldly rivals a plate of latkes.

3/4 cup unbleached flour (or more as needed for dipping)

Wash endive thoroughly to remove any dirt. If it’s a particularly large head of endive, cut it in half and store the rest for later use. Chop the endive roughly into approximately 3-inch pieces.

Drop endive into a pot of salted boiling water and cook for 2-3 minutes, until the leaves are slightly softened, but not wilted or mushy. Drain, remove excess moisture with a towel, and allow to dry.

Pour 2 inches of oil in a saucepan. Heat over medium-high heat to 375 degrees. Meanwhile, beat eggs and water together in a bowl and set aside. Spread flour on a plate and set aside.

When oil is hot, dip endive pieces one at a time into egg wash, then dip in the flour. Slip battered endive into oil in batches and deep-fry for about 3-4 minutes, turning with tongs until golden.

Transfer to paper towels and allow to drain. Sprinkle liberally with salt, pepper, and lemon zest and serve immediately. 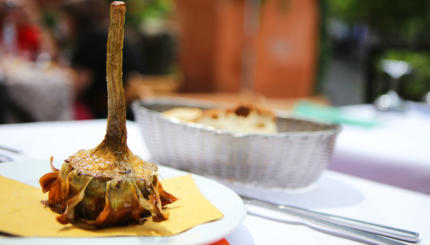 Traditional and Contemporary Jewish Food for Every Occasion.

Of course you do. Stupid question. Everyone likes Italian food because itâ€™s almost alarmingly delicious. Do you like Jews? Do ...