Rhubarb is one of my favorite parts of spring. It shows up early in the growing season and provides a nice tart kick to so many desserts of the season. Everyone knows to put rhubarb in pies, and rhubarb cobblers and crisps are always a good bet at the end of a Shabbat or holiday meal. But this year as the beginning of rhubarb season coincided with Shavuot, I wondered if I could integrate some rhubarb into traditional Shavuot recipes.First I went with something simple. I made a traditional cheesecake (in my case vanilla with white chocolate) and then added rhubarb compote on top. The results were deemed a smashing success by my taste testers, but then I was left with quite a bit of extra rhubarb compote, and wasn’t sure what to do with it.

Enter the rugelach! My rugelach recipe comes from a teacher at the Orthodox Jewish high school I attended. She took time out of her Tanakh class to pass on this culinary jewel. She makes the cookies with ground nuts, cinnamon, and sugar, but in the years since high school I’ve successfully adapted the recipe to add raisins or chocolate. With my rhubarb compote I decided to try a new variation, and the results have already been reduced to a small pile of crumbs.

People seem to think that rugelach are very labor intensive, but this recipe requires very little fuss and yields delicious and attractive results. It does not involve cream cheese, which some people say is what makes rugelach appropriate for Shavuot, a holiday when we focus on dairy foods. However, it does call for a cup of butter, and while technically you can make it with pareve margarine, I strongly suggest that you use the real stuff in order to attain the optimal rugelach results.

1 lb rhubarb, washed and sliced (only rhubarb stalks are edible. Discard the rest).

To make the rhubarb compote:

In a medium saucepan, combine rhubarb, sugar, cinnamon, and orange juice. Bring just to boiling; reduce heat. Cook, uncovered, and stirring occasionally, about 10 minutes or until rhubarb is broken down; set aside.

To make the rugelach:

In a cup mix the water, sugar, and the yeast. Let sit.

In a large bowl combine butter and flour (mix with your hands); add eggs and the yeast mixture to the bowl. Kneed the dough until smooth and soft and then divide into thirds.

Cut the dough into 12 pieces like you would cut a pizza and roll each piece from the outside in. The rhubarb will make this process messy, and you’ll probably want to clean off the counter between batches. Place each cookie on a greased cookie sheet with the point (from the center of the circle) face down. Repeat with remaining dough.

Bake at 350 degrees for 20 minutes or until browned slightly. 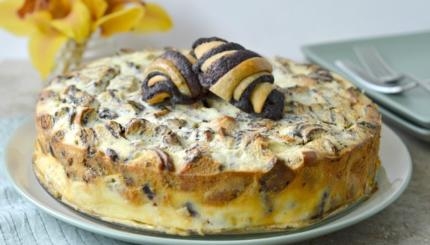 A roundup of recipes for the springtime holiday.

Whether eating seasonally is important to you or it’s just something you read about on food blogs, I bet you’ve ...