In shape and stature, the lentil is rather unremarkable – a small, pebble-like legume dressed in muted earth tones. But in the Torah, the lentil is a food of drama and deceit. Early in the book of Genesis, in Parashat Toldot, Jacob alters the course of his (and the Jewish nation’s) history by coaxing his brother Esau to sell him his birthright in exchange for bread and a “pottage (stew) of lentils.”During biblical times, lentils were among the most widely consumed foods. According to Gil Marks’ Encyclopedia of Jewish Food (Wiley, 2010), “Lentils, together with barley, einkorn, emmer (wheat), and millet, constituted the bulk of early agriculture.” Later in Jewish history, lentils came to be associated with mourning, served alongside hard-boiled eggs at the seudat havra’ah, the meal of consolation that follows a burial. The connection, Marks explains, comes from lentil’s “spherical shape with ‘no mouth,’ (no opening)” which he says is symbolic of mourners who often remain silent.

Lentils have never been a particularly revered ingredient among Ashkenazic Jews. They were long considered food of poverty, and were rarely seen in traditional settings outside of the occasional bowl of lentil soup. Sephardic communities, however, took on Arab cuisine’s love of the lentil, using it to bolster salads, soups, and rice dishes. The most famous of these dishes is mujaderra, a savory dish that combines lentils with rice and deeply browned onions.

There are many different types of lentils available, most commonly brown, red, green, and French lentils. Each variety of this protein and amino acid-rich legume shares a mild, earthy taste, although flavor subtleties vary. Cooking times also vary, depending on the type and whether or not the lentil has its hull. Most versions take between 10-30 minutes to soften during cooking (to cook, boil in water, then simmer on low heat until tender). The recipe below uses cooked lentils as the base of a satisfying burger, topped with a zingy and quick mango chutney.

For burgers: Add lentils to a food processor and pulse until mostly pureed, with a few whole pieces. Transfer to a large mixing bowl and stir in the onion, parsley, eggs, breadcrumbs, salt, garlic powder, and paprika.

Heat 2 tablespoons oil in a non-stick or cast iron skillet over medium heat. Shape lentil mixture into patties; add to skillet, cover, and cook until browned and warmed through, 6-8 minutes per side. Remove cooked patties; heat remaining olive oil in pan and cook remaining patties. Serve topped with mango chutney (below)–alone or on a bun.

For chutney: Heat olive oil in a saucepan over medium heat. Add the onion and cook, stirring occasionally, until softened but not browned. Stir in the vinegar, brown sugar, ground ginger, red pepper flakes, garlic powder, and curry powder (if using) and cook for 2-3 minutes until the spices are fragrant. Add the chopped mango, lower the heat, and cook until softened and jammy, 5-6 minutes. Remove from heat, allow to cool, and dollop on lentil burgers.

A vegetarian bean stew with cinnamon and tomato. 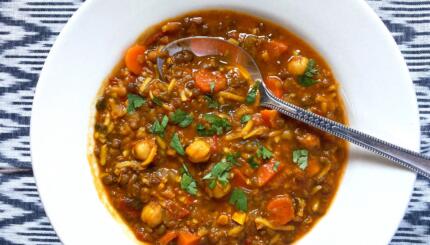 This hearty soup is brimming with vegetables and tastes even better the next day.