What Does ‘Torah’ Mean?

The Book of Proverbs, which offers a rather eclectic group of pithy maxims and teachings, observations about the world and human nature, and a few longer poems extolling universal virtues, frequently uses the word torah. In the opening verses of the book, which are framed as advice to a youth, offer this encouragement:

My son, heed the discipline of your father,

And do not forsake the instruction (torah) of your mother.

In this verse, torah does not mean the Torah of Moses, but simply good instructions and advice that only a parent can give.

One of the most resonant uses of the word in the Book of Proverbs is this lovely verse which serves as the basis for the names of many synagogues and other Jewish institutions:

For the commandment is a lamp (ner mitzvah),

The teaching is a light (torah or),

And the way to life is the rebuke that disciplines.

Throughout the Book of Proverbs, which abounds with poetic parallels of all sorts, we see that torah is synonymous with other words that describe virtuous instruction and knowledge, most notably wisdom, another key word of the book. Wisdom takes on a life of its own in Proverbs — literally. In the eighth chapter, wisdom is imagined as a woman who speaks to us. She is both hopelessly alluring and utterly wholesome. She is the path to all that is right and good.

In her speech, Lady Wisdom describes herself as older than creation. In that void or primordial chaos that existed before the world was created, God first created Wisdom — then everything else. Wisdom here is imagined as a kind of principle of order and goodness that made the entire world both possible and worthwhile. But for a brief moment in cosmic time, after Wisdom was formed and before the world was created, she was the only companion of the divine:

The Lord created me at the beginning of His course

As the first of His works of old.

In the distant past I was fashioned,

At the beginning, at the origin of earth.

There was still no deep when I was brought forth,

No springs rich in water;

Before [the foundations of] the mountains were sunk,

Before the hills I was born.

He had not yet made earth and fields,

Or the world’s first clumps of clay.

I was there when He set the heavens into place;

When He fixed the horizon upon the deep;

When He made the heavens above firm,

And the fountains of the deep gushed forth;

When He assigned the sea its limits,

So that its waters never transgress His command;

When He fixed the foundations of the earth,

I was with Him as a confidant,

A source of delight every day,

Rejoicing before Him at all times.

It’s an incredible image — one of the most compelling in the whole Book of Proverbs — this idea that wisdom was created first and was a companion who delighted God before there was anything else in the world. In the Book of Proverbs, it is suggested that she can be like a companion to delight and advise us too.

The rabbis, known for remarkably playful and even outrageous interpretations of biblical verses, pick up on this image of Lady Wisdom — and transform it utterly. They remember that throughout the Book of Proverbs, wisdom is equated with torah (meaning instruction). But they imagine that instead, Wisdom (capital W) is equated with Torah (capital T) — the sacred scripture of the Jewish people. Instead of imagining God’s companion as a beautiful creature who delights the divine and inspires creation, they imagine it is the Torah which emerges in the primordial darkness and makes the whole world possible. This midrash opens one of the most famous and well-loved collections of midrashim, Genesis Rabbah:

The Torah is saying, “I was the artisan’s tool of God.” (Proverbs 8:30) [Above, when we quoted this verse as part of the speech given by Lady Wisdom, we translated it as “I was with him as a confidant” — the Hebrew can be interpreted in multiple ways.]

This midrash is as famous as it is elegant. The rabbis play with the verses to identify the Torah with wisdom (not a huge stretch, of course, when we remember that torah means instruction and is identified throught Proverbs with wisdom) and reread this speech of wisdom in Proverbs 8, in which she says that God made her first before the rest of the world, to imagine that it was actually the Torah (as in scripture) itself that predated creation. Not only that, but the Torah was in fact a blueprint for the entire world — a guide that God used for creation.

This midrash is so famous not because it is the best literal reading of Genesis or Proverbs, but because it expresses so ecstatically and poetically what Torah means for the rabbis and for the Jewish people. It is audacious, imagining Torah to be as foundational for the whole world as it is for the Jewish people. Moreover, it is the ultimate source of instruction, not only for us, but even for God.

Learn more about Genesis Rabbah, the remarkable collection of midrashim that begins with this teaching. 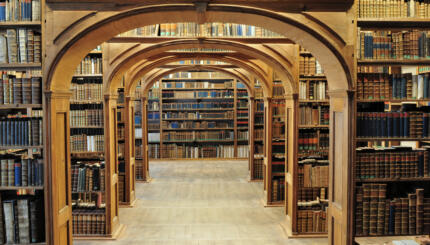 How to Read the Book of Proverbs

We don't read it in synagogue, and we aren't used to reading collections of maxims like this — so how should we get the most out of reading Proverbs?

This past Simchat Torah I had the fortune of dividing my time between two minyanim: the Mount Sinai Jewish Center in Washington ...