Many biblical books are written entirely or mostly in verse, including most of the books of prophecy, Proverbs, Job, The Song of Songs, Psalms, and Lamentations. There are also poems scattered through most other biblical books. In this article, we will examine poetic examples drawn from the books of Psalms, Lamentations, and the Song of Songs, all of which consist entirely of poetry but which differ greatly in style and in tone. (It should be noted that our view, presented at the end, of the Song of Songs as a structured dialogue between a king and a young woman is certainly not the only interpretation available, it is supported by poetic evidence.)

All poetry is shaped by conventions that dictate how long its lines should be, and how it should be patterned. The conventions vary across literary traditions. English poetry between the 1500’s and 1900 called for lines in one of several kinds of meter, patterned rhymes at the ends of lines, and division into stanzas.

In Old English, poetry lines were divided into half lines, and their length based on the number of stresses (two per half-line). Patterning was based, not on rhyme, but alliteration.Two to three stressed words per line began with the same sound. The third stressed element alliterated with at least one of the first two. The fourth did not:

“Bagels for breakfast, / bread for supper;”

In most biblical poetry, lines consist of two or three versets (sections of a line), most with 2-3 stresses. Patterning is based on meaning, not sound. Versets of a line are usually parallel.

Her elect were purer than snow,

Their limbs were ruddier than coral,

Like poetry in other traditions, biblical poetry employs techniques for conveying meaning beyond the literal sense of the words, putting across the poem’s message more effectively, make it easier to set to music and remember, and entertaining or moving its hearer. They include:

Original: What is man that You are mindful of him?

And of mortal man that You take note of him? (Psalms 8:5)

Parody:  What is man that You make much of him,

that You fix Your attention upon him?

You take note of him every morning,

Inspect him every minute.

Will You not look away from me for a while,

2. Metaphors, often with a standard meaning, so interpretation requires attention to their use elsewhere. When the Shulamite describes her beloved as a tree in whose shade she wishes to dwell (Song of Songs 2:5), she is using a conventional metaphor for an overlord (Ezekiel 31). Those who dwell in the tree’s shade are vassals.

3. Stanzas, whichorganize biblical poems more often than is reflected in most translations. The song about the bridegroom in Song of Songs 5:9-16 has 7 regular stanzas of four versets each.

4. Refrains, as in Isaiah 9:7-10:4, where the refrain “Yet His anger has not turned back, and His arm is outstretched still” is repeated four times, after each strophe.

5. Parallel structure of verses, stanzas, or sections of a poem. (The parallel stanzas below each include one pair of parallel versets (C,C’). The second stanza lacks one verset.)

B  O one whom my soul loves,

C Where will you feed your flock;

Where will you have us recline at noon?

D For why should I be like one who goes astray

E Beside the droves of your comrades?

B’ O fairest of women,

C’ Get yourself out at the heels of the flock;

(There is a verset missing here)

6. Chiastic patterning of lines, stanzas, poems, sections, or an entire work. When a passage is organized as a chiasm, elements in the second half correspond to those in the first half, but in reverse order (a, b, c; c’, b’, a’). A chiasm is a rhetorical device that sets up comparisons and contrasts. An unpaired element in the middle indicates what is central, as shown below:

A For behold, the winter has passed over,

The rain gone by and departed,

A’ The figtree has ripened its unripe figs,

In this chiasm, A and A’ both indicate season: A the transition from winter to spring, A’ summer moving towards grape harvest time. B and B’ speak of what has been seen and heard. C conveys the central message.

7. Janus constructions, in which a line understood as parallel to a previous line when read one way, is then revealed to also have a second meaning parallel to a line that follows it. Hebrew lends itself to puns and double meanings; both are common in biblical poems. The three central lines of the last example illustrate a Janus construction. Read as ‘the season for pruning has arrived’ the middle line corresponds to ‘flowers have been seen in the land’. Read as ‘the season for singing‘ it corresponds to ‘the turtledove’s call has been heard in our land.’

8. Alphabetic acrostics, in which verses or stanzas in the Hebrew text begin with successive letters of the alphabet. (Lamentations 4).

Types of poems and examples

Biblical poems were written for specific purposes and sung on specific occasions. Types (with examples provided) include poems for:

Psalms, Lamentations, and the Song of Songs are sets of poems divided into five parts. All were composed for the three-times-a-year Israelite pilgrimage festival ancestral to the Jewish High Holidays. (The festival ritual as reflected in Psalms is discussed by Sigmund Mowinkel in The Psalms in Israel’s Worship (1962) and Michael Goulder, The Psalms of the Sons of Korah (1982); The Psalms of Asaph and the Pentateuch (1996)).The order of the festival, reflected in Psalms and Lamentations, was:

1.      The pilgrimage (Psalm 84; Lamentations 1), with selichot (penitential hymns also introducing our prepatory period to the High Holidays) sung at night (Psalm 3), ending with entrance to the shrine (Psalm 24).

3.      The atonement ritual. Major themes include sickness, mistreatment, silent suffering, and confinement in a watery pit or grave (Psalm 69; Lamentations 3).

Psalms contains 150 liturgical songs composed for the Jerusalem temple; or for Bethel or Dan and subsequently altered for use in Jerusalem (see the Goulder books referenced above; not all scholars agree with this position). Each section contains one or more series of psalms following the order of the pilgrimage festival; all told, a dozen. The individual psalms and series range widely in their date of composition.

Lamentations mourns Babylon’s destruction of Jerusalem and as a substitute for a fall festival, but without celebration. Three dirges alluding to the usually festive pilgrimage, enthronement ceremony, and banquet emphasize Jerusalem’s terrible suffering (Lamentations 1,2,4). The supplications for the atonement ceremony (Lamentations 3) and judgment (Lamentations 5) plead for restoration.

The Song of Songs consists of dialogue between a king and a young woman accompanied by young men and maidens who sing their wedding songs. Most songs have parallel stanzas; some are chiasms. Parallel episodes each include several songs, and are separated by interludes. Song of Songs is traditionally considered a wisdom book and rightly so, judging by its praises, motifs, and allusions to a moral story in Proverbs (Proverbs 5:1-6:5, 6:20-27). Song of Songs 5:2-7 is based on an allegorical poem about personified Wisdom (Proverbs 1:20-28). 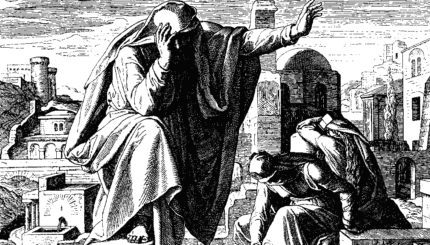