Israelis dearly love their cake and coffee, and given the scarcity of ingredients and resources in the early years of the state, they always have exercised delightful ingenuity in creating desserts. When few people had the lux­ury of a home oven, they concocted sweets like a knacknick (salami) of cocoa, crushed vanilla wafers, wine and nuts rolled together, refrigerated, and then cut into slices.

A Passover cake made from layers of matzah dipped in wine and slathered with chocolate and halvah (ground-sesame-seed candy) and chopped nuts reminded new immigrants of the Hungarian and Turkish layered desserts of their childhoods. During zena, the austerity period in the late 1940s and early 1950s, cooks often substituted peanuts for the more costly walnuts and almonds in their tortes, with powdered eggs replacing fresh eggs in delicacies like cream puffs.

Baking in the Communal Oven

In the late 19th century, traditional cakes often were brought to a communal oven. “A public oven is built not far from the synagogue,” wrote Hannah Barnett Trager, an English visitor to Palestine. “It is very large, and each family sends cakes in its own tins to be baked in it. Generally about half a dozen tins are carried by each boy. Nothing I have seen before can be compared with the many kinds of delicious cakes and stuffed monkeys (English Jewish almond pastries) that are seen here. My mouth waters even when I think of the delicious strudels filled with sesames and plenty of raisins and shiros!”

In those days, the oven meant more than a place to bake cakes. “There is probably not a thing that has hap­pened in Jerusalem during the last two months that is not discussed around the public oven while people are waiting for their cake tins; and, as everyone wants to talk rather than to listen, the noise is like the buzz in a factory,” wrote Mrs. Trager.

Then came the wunderpot, also called the wunderkucher. Nobody seems to know the exact origin of this German covered Bundt pan created in the 1920s, but it was a miraculous solution for home bakers with no oven and no steady supply of fuel or reliable electricity, because the cake could be baked over a propane burner. The batter would be poured into the Bundt pan, covered with a metal lid with holes around the sides, and put on a plate which covered the p’tiliah (propane burner), so as not to burn the bottom of the cake.

“We would even make yeast doughs in our wunderpot,” recalled Dalia Carmel, who grew up in Jerusalem. “Because of the cross-ventilation in our apartment and the fragility of the wunder­pot, my mother made me stop running and keep the doors closed when a cake was baking. Sometimes I felt like the wunderpot was a live person that you couldn’t disturb.”

Today, although almost a vanished species in Israel, wunderpots are occa­sionally used in rural villages elsewhere.

Learning the Art of Cake Baking

Some immigrants did not know the art of cake baking until they came to Israel. I remember one Yemenite cook who told me that before she arrived in the late 1940s on Operation Magic Carpet, she never had tasted a cake in her life. As part of her assimilation process, she was taught by British-born women the bene­fits of using cheese and eggs in cooking, and in cooking classes for new immi­grants she learned to bake cheesecakes and apple tortes. Now, she told me with surprise, nutrition experts tell her that these treats are detrimental to her diet, and they ask her instead for the “healthy” fruit desserts that she used to eat in Yemen!

To others, like many North African immigrants, cake baking is a holy act. “For these women, who raised their children through times of famine (World War II and the 1948 War of Independence), having enough food to eat is indeed a sign of divine favor,” wrote Professor Susan Starr Sered in “Food and Holiness: Cooking as a Sacred Act Among Middle-Eastern Jewish Women” (Anthropological Quar­terly, July 1988). “It is significant that the women use food to thank God for granting a petition. For example, they distribute cookies or cakes to all of the pilgrims at holy tombs when a prayer has been answered as a result of pilgrimage to that tomb. In providing food for others, the women are, in a way, imitating God.”

For them, as well as for women of the local Arab communities, a dessert like a plain cookie, which does not require any skill to make, is not a dessert worthy of guests. So we have the unusual ka’ak b’adjwah, a Syrian circular butter cookie filled with dates; galettes sucrees, a Moroccan biscotti-like cookie with dried apri­cots and nuts; and other Middle Eastern cookies in many incarnations, beauti­fully executed with great dexterity and pride.

Many traditional desserts, which are reminders of life in the Diaspora, are also seasonal celebrations of the natural cycle of the Jewish year. Czech apple cake, served at Rosh Hashanah, is symbolic of the new fruit of the fall harvest; a Polish cheesecake made at Shavuot, the “dairy” holiday, is prepared during the season of the most abundant milk and cheese production in the land of Israel; the Gali­cianer chocolate torte for Passover celebrates the barley harvest and the exodus of the Jews from Egypt; and the fruit-filled hamantaschen and other pastries use up the flour at Purim before Passover. For many families who hail from Europe, these desserts, now prepared in Israel, are also reminders of the lives left behind because of the Holocaust.

Reprinted with permission from The Foods of Israel Today(Knopf). 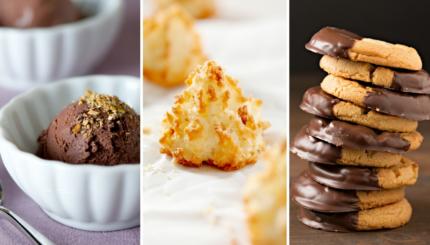 Desserts that are so delicious, you will make them all year.