Leave it to the Jews to have a cookie inspired by cultural annihilation! Hamantaschen are the triangular pastries associated with the holiday of Purim, when Jews read from the Book of Esther, the Megillah, and celebrate the triumph of good (Esther) over evil (Haman, who planned to destroy the Jewish people).

This Yiddish word is pronounced huh-min-tah-shun, and while technically the plural form of hamantasch, the word hamantaschen can refer to either one cookie or many. To shape hamantaschen, circles are cut from thinly rolled dough and the sides are folded in around a dollop of filling. The cookie can be crumbly (if made with oil), or softer (when made with butter or cream cheese); and filled with almost anything: fruit, cheese, chocolate, Nutella. Did I mention Nutella? Or even savory ingredients. Traditionally, poppy seed, or mohn, was used, which some say represent Haman’s bribe to King Ahasuerus or Esther’s meals while in the king’s palace.

The cookie itself is also highly symbolic; the most common interpretation is that they resemble the three cornered hat worn by Haman. In Hebrew the cookies are called “ozney Haman” which means “Haman’s ears” and refers to the custom of cutting off a criminal’s ears before his execution. Mmm, yum, cookies! A third idea suggests that each corner of a hamantaschen represents one of the “fathers” of Judaism—Abraham, Isaac, and Jacob—whose “power” weakened Haman and gave strength to Esther to save the Jews (incidentally, tash in Hebrew means “weaken”). One more thought is that because the German word tasche means “pouch” or “pocket,” the cookies could signify Haman’s pockets and the money he offered to the king for permission to kill the Jews. 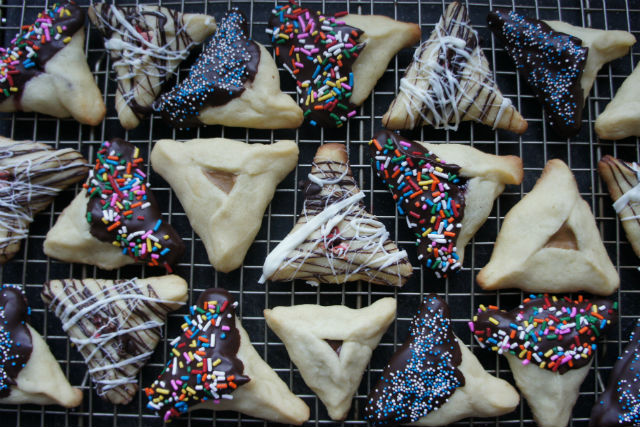 Worth noting, however, is that mohn-filled triangle-shaped cookies existed in Europe since the Middle Ages (and German MohnTaschen, or “poppy pockets” appeared soon after), so it is possible that Ashkenazi Jews adapted the story of Purim to popular cookies already in existence, whose name conveniently sounded like Haman (mohn). In addition to making, eating and gifting these three-sided treats, Purim is also a time to wear costumes, dance, and drink booze which may or may not remind you of parties you attended in college. Just don’t try to make any hamantaschen in the heat of merriment, as it’s already a challenge to keep those corners together and not end up with a tray of jam volcanoes.

Some hamantaschen recipes to try: 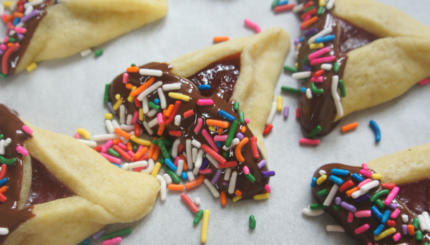 Spruce up the classic hamantaschen with some melted chocolate and colorful sprinkles. 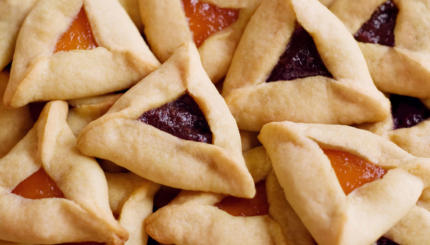 From poppy to chocolate, these are our readers' favorite ways to enjoy hamantaschen. 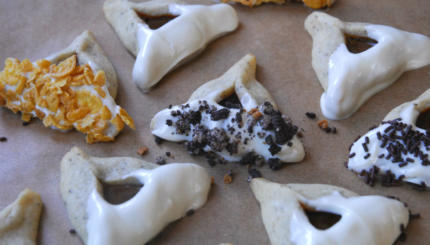