The holiday of Hanukkah last for eight days, though technically it stretches over nine calendar days since Jewish days begin the night before.

There are two main traditions concerning the length of the holiday. The better-known version comes from the Talmud in Shabbat 21b, where the rabbis are discussing the laws of the Hanukkah menorah when the question is raised: What is Hanukkah anyway?

Here the Talmud relates the famous story of the holiday, in which the Hasmoneans, having retaken the temple from the Greeks, find only enough pure oil to burn the temple candelabra for one day. But a miracle occurred and the oil burned for eight days. The following year, the holiday of Hanukkah was instituted to correspond to the eight days that the oil burned.

A lesser-known tradition has it that the first Hanukkah was actually a belated celebration of the eight-day holiday of Sukkot, which falls roughly two months earlier on the Hebrew calendar. Because the Maccabees were then engaged in a bloody rebellion against the forces of King Antiochus, Sukkot could not be celebrated at its proper time that year. Instead, it was celebrated later, on the 25th of the Hebrew month of Kislev, when the Maccabees had finally retaken the temple. 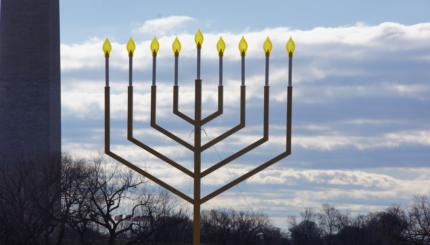