Forget the Crunch – Try These Creamy Potato Latkes for Hanukkah

One of the best parts about Hanukkah is arguably the fried food, especially the latkes! Emblematic of the olive oil that miraculously lasted eight days, latkes are a delicious way to tell the story of this eight-night holiday.

But if you think about it, potato latkes are kind of a newfangled tradition! Potatoes certainly hadn’t crossed the Atlantic when Jews first celebrated their liberation from the Syrian-Greeks, so what did they eat? And when did potato latkes rise to such popularity? What traditions were left behind?

The late food historian and rabbi Gil Marks had the answer in a 2010 article: We’re not exactly sure what foods were traditionally made prior to the 14th century, when two types of Hanukkah foods emerged on the record, dairy foods and fried foods.

The Sephardic Jews made many variations of fried sweets for the holiday, while Ashkenazi Jews in Northern Europe made fried blintzes and donuts. Italian Jews in the 15th century made fried ricotta cheese pancakes (“cassola”) which were arguably the first “latkes.” Fried cheese commemorated the heroine Judith, who was central to Hanukkah celebrations during this time.

Latke recipes changed from region to region, depending on what resources were plentiful and accessible. In Northern and Eastern Europe, for example, schmaltz (chicken fat) or duck fat was used in place of oil. Along with cheese latkes, buckwheat latkes were the norm. Roasted goose, a seasonally anticipated dish, was also traditional on the Ashkenazi table.

Initially regarded with suspicion and fear, ugly, knobby potatoes were soon embraced by the peasants of Europe in the late 18th century due to a series of crop failures and famine. Potatoes safeguarded them against the unpredictable rise and fall of grain prices, and kept them healthy and full. In fact, according to the Smithsonian Magazine, potatoes were so successful in Europe that “the effective result, in terms of calories, was to double Europe’s food supply.”

Thus, potatoes changed the diet of Europe, became central to Hanukkah latkes, and the rest of the day-to-day menu. 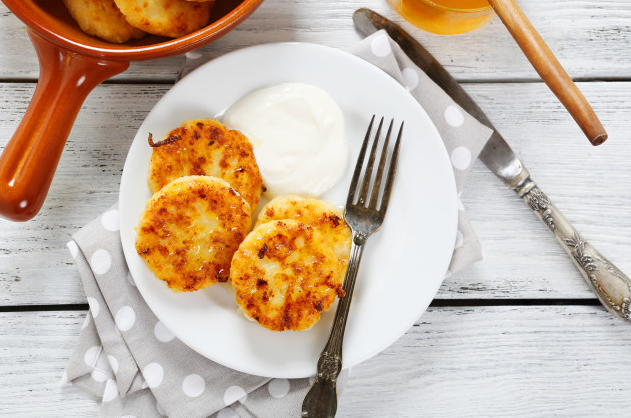 Experience the evolution of latkes throughout history this year with these delicious recipes: 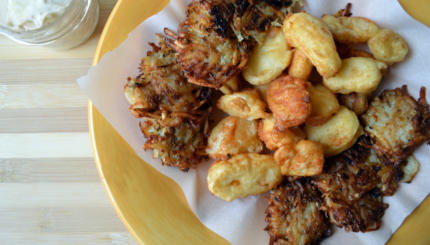 Cheese and beer marry deliciously in this indulgent holiday dish. 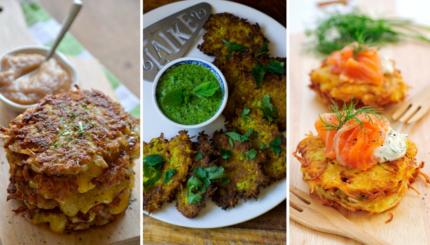