For food enthusiasts, especially those of us who love to cook and bake, there is simply no such thing as too many cookbooks. This year, we are particularly lucky because there are so many beautiful new Jewish and Israeli cookbooks on the shelves, just in time for the holiday season. Here’s a list of some new titles to enjoy in the waning days of 2021 and beyond.

For your friend who’s obsessed with their Instant Pot:

In Emily’s Paster’s “Instantly Mediterranean: Vibrant, Satisfying Recipes for Your Instant Pot, Electric Pressure Cooker & Air Fryer,” you’ll find recipes both familiar and exotic, from homemade chicken broth finished in an hour to chraime, a North African fish stew that’s ready in less than 25 minutes. It even includes a recipe for Instant Pot Shakshuka two ways, sure to be a new favorite.

For the chocolate lover:

In “Babka, Boulou and Blintzes,” Michael Leventhal tells the story of Jews’ involvement with chocolate and he sweetens the tale with 53 recipes, new and old. Esteemed food writer Joan Nathan contributed a 400-year-old recipe for chocolate almond cake that was passed down orally in a Jewish family from Bayonne, France, where Spanish Jews settled in the 16th century. The recipes span sweet dishes like chocolate and Nutella blintzes, as well as savory foods as well like noodles with cocoa. It’s truly a Jewish chocolate lover’s dream.

For your friend who is all about mocktails:

Benny Briga, the founder of Cafe Levinsky 41 in Levinsky Market in southern Tel Aviv, partners with cookbook author Adeena Sussman to teach you how to make gazoz, the all-natural, sparkling drink flavored with home-brewed fruit nectars, herbs and spices. In “Gazoz: The Art of Making Magical, Seasonal Sparkling Drinks,” the authors give you a roadmap to making these beverages and entice you to do so with gorgeous, color-saturated photography throughout.

For the food history buff:

Helene Jawhara Piner has amassed recipes that date back more than 700 years in “Sephardi: Cooking the History: Recipes of the Jews of Spain and the Diaspora, from the 13th Century to Today.” Much of Jawhara Piner’s research focuses on records from the trials of the Inquisition, in which the foods and culinary practices of Jews were recorded. In this collection, you will find recipes from 13th-century Spain for challah and fried donuts, as well as a version of chicken soup dating back to the12th-century scholar Maimonides, which includes a soft boiled egg.

For the Israeli and Mediterranean food lover:

World-renowned cookbook author Claudia Roden is an Egyptian-born Jewish food writer credited with changing the Western perception of Middle Eastern and Mediterranean food. In her latest book, “Mediterranean: Treasured Recipes from a Lifetime of Travel,” she shares a collection of 100 recipes which feel personal and connected to her own memories. This collection includes recipes for muhammara, the walnut and roasted pepper dip with roots in Syria and Turkey, and her mother’s cucumber and tomato salad that would be just as at home in Israel as it would in her native Egypt, among other beautiful dishes.

In “The itrek Cookbook: A Journey Through Israel’s Food Culture,” you get a cookbook that is also part travelogue. itrek is an organization that introduces graduate students from leading universities to Israel, and the book presents bits of delicious history alongside a selection of recipes you would only find from native Israelis, including grape salad with sumac and onions and Israeli couscous with ground lamb and pomegranate seeds among others. There is also a chapter devoted to the foods of Shabbat, including Eastern European cholent — a slow-cooked stew of meat, potatoes and beans — and, for dessert, sweet and savory babkas.

In “Bavel: Modern Recipes Inspired by the Middle East,” by L.A.-based chef Ori Menashe and his partner, Genevieve Gergis, the food boundaries between countries blur. There are recipes for salads and desserts made with the tart ground berry, sumac, as well as instructions on how to make your own whole wheat pita and different takes on the Yemenite hot sauce, zhug. Don’t miss family recipes like Menashe’s Moroccan mother’s beef cheek tagine or his Georgian-born grandmother’s meatballs made with cracked bulgur wheat and ground beef, poached in chicken stock.

For your friend who is obsessed with baking carbs:

In Lior Mashiach’s book, “Lioroooosh Baking From My Tel Aviv Kitchen,” she will show you how to make challah many ways, from classic to pumpkin, and each recipe is accompanied by detailed braiding photos. And while her kitchen is in Tel Aviv, much of her heart is in the United States, as shown with recipes for baked goods to make on Thanksgiving, like cornbread. You will find recipes that are familiar — brownies, quiches, rugelach — and others that are less so, like kubaneh, the Yemenite buttery bread prepared for the Sabbath, which is well worth knowing. 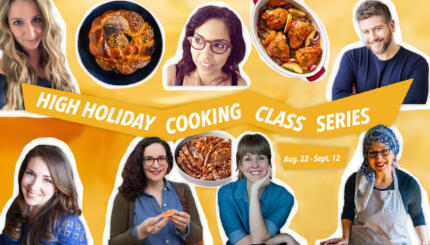 ‘Tis the season of endless Jewish holidays, back to school frenzy, an abundance of apples…and also niche Jewish cookbooks. With ...