There are two books of the Hebrew Bible set entirely in diaspora: Esther and Daniel. In both books, the Jews face an existential threat from hostile foreign authorities. In both books, a few select Jews who have been noticed by authorities for their wit and beauty adopt non-Jewish names (Hadassah becomes Esther, Daniel becomes Belshazzar) and rise to positions of political influence. Both books deliver a satisfying ending: Evil actors that would thwart the Jews are ultimately struck down, paving the way for a secure Jewish future.

In the more than 2,000 years since Esther and Daniel were written, Jews have mostly lived as minorities in their countries. With the exception of the Second Temple period that ended when the Romans destroyed Jerusalem in 70 CE and the period of the modern State of Israel, from 1948 until the present, there has been no other option. Diaspora has therefore been the experience of the vast majority of Jews over the last few millennia. In some cases, Jews have flourished as a minority community. In many cases, persecution has been a serious problem. And most of the time, decisive resolutions like those found in Esther and Daniel have failed to materialize. Always, though, these biblical books have been there for the communities experiencing persecution, offering words of comfort, advice and hope.

As much as Esther and Daniel have in common, however, the differences between them are perhaps more illuminating. While they both deal with the familiar dilemma of Jews as an oft-hated minority subject to the whims of sometimes hostile governments, under the surface they present two different approaches to this plight.

Of the two heroes, Daniel is more openly Jewish. His religious background is virtually impossible to hide because he is among those who were brought into exile in Babylonia. But he also makes no effort to hide it. Even as he learns the language, customs and teachings of his captors, he refuses the food they serve because it is not kosher, asking for a vegetarian diet instead. This turns out to be so nourishing that he quickly masters his studies and outperforms fellow pupils (making him, perhaps, the original Jewish overachiever).

Esther, by contrast, on the advice of Mordechai, explicitly hides her identity for much of the book. Even after King Ahasuerus marries her, he has no idea that she is a Hebrew. Only when Mordechai sternly warns her that she will not be spared from Haman’s genocide if she does not use her position of power to save her people does she decide to reveal her identity. But first she spends considerable time fasting and then preparing the king for this revelation, buttering him up with two lavish private banquets.

It is virtually impossible to be an observant Jew without drawing some attention to one’s difference. When faced with this dilemma, Daniel and his friends (Shadrach, Mishach and Abednego) never transgress God’s law to hide their identities. Not only do they forgo non-kosher food, they also refuse to worship idols when commanded to do so. In both cases, they are sentenced to death. The friends are thrown into a fiery furnace and Daniel is tossed to hungry lions. In both cases, they are miraculously saved.

It is less clear whether Esther made the same calculation about observing Jewish law. The book is not explicit about her behavior in the palace, but it is difficult to imagine that she managed to keep kosher, observe Shabbat and worship her own God while being intimate with a foreign king. Rabbinic literature suggests she did, but the laborious arguments the rabbis make to prove this reveal that they worried she might not have. At the very least, it is inarguable that she married a non-Jew. This difference between Esther and Daniel hints at the primary division between the two: In Daniel, miracles come to Jews who keep faith. In Esther, the Jews cannot rely on miracles and must sometimes make compromises to save themselves.

It is often remarked that God is not invoked in the Book of Esther. When the lots are cast and the 13th of Adar is chosen as a date for Jewish destruction, Jews do not turn to prayer — they go straight to mourning. Mordechai doesn’t put hope for salvation in God, but rather in Esther, the only Jew who has the ear of the king. It is through her decisive action that the Jews are ultimately saved.

By contrast, Daniel frequently invokes God — so much so that the rabbis cite Daniel as a model in discussions of Jewish prayer. Unlike Esther, who does everything she can — fasting and making banquets — to appease her king before revealing her identity, Daniel brazenly refuses his king’s order to worship an idol and receives the expected response: an order of execution. But in Daniel we can expect God to perform a miracle on behalf of our hero and, indeed, that is what happens.

Daniel’s experience is a microcosm of the larger message of the book, which ends with a series of visions about an unnamed evil king who will threaten the entire Jewish community. The apocalyptic visions predict that God will descend from heaven to destroy the threat, after which a new messianic order will be established. In Daniel, the ferocity of persecution is a sign that God is about to intervene miraculously. All the Jewish people need to do is keep their faith and wait.

Both stories have traveled with the Jews for millennia. But one has certainly been more popular than the other. Every year, Jews read the story of Esther on Purim. They grab their groggers and drown out the name of the villain Haman who nearly destroyed their ancestors. They celebrate the heroes, Esther and Mordechai, whose smart and brave decisions averted catastrophe.

The message of Daniel, however, has been subsumed. The unnamed evil king described in the final chapters of the book is Antiochus, the villain of the Hanukkah story. Daniel predicted that God would destroy this king without any human action, but the tradition of Hanukkah tells us that Jews did act on their own behalf — the Maccabees were a key part of overthrowing that particular tyrant.

The inclusion of both books in the Hebrew Bible reminds us that there is no one-size-fits-all solution for the problem of persecution, and that Jewish tradition accommodates a range of approaches. Historically, Jews have adopted both models — sometimes compromising their traditions or hiding their identities to survive, at other moments refusing to do so and even choosing death instead of desecrating God’s name. 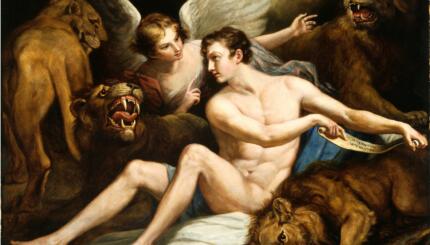 Introduction to the Book of Daniel

Filled with fantastic visions and miraculous escapes, Daniel is concerned with foreign persecution and the end of days. 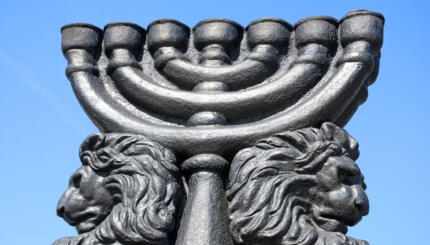 The Secret Connection Between Hanukkah and the Book of Daniel