Question: I’m confused about the bitter herbs on the seder plate. Growing up, we always had bright purple horseradish, but recently I’ve been seeing people use slices of horseradish root (is that the same thing?), lettuce, celery, even a potato! Potatoes aren’t bitter! Are there any rules about this?
–Eric, Portland

Answer: Of course there are rules, Eric! We’re Jews!

The commandment to eat bitter herbs comes straight from the Torah, where it says that we should eat the paschal sacrifice “roasted over fire with matzahs and merorim.” (Exodus 12:8) Merorim is the plural form of the word maror, which comes from the Hebrew root mar, meaning bitter. The Torah doesn’t specify why we should eat maror–most often translated as “bitter herbs”–but it’s commonly accepted that these herbs remind us of the bitterness of the lives of Israelites in Egypt.

Already in the Talmud the rabbis wrestled with the same questions you’re asking. What counts as a bitter herb? They came up with a list of qualifications for a vegetable that can be used as maror: It should be bitter, have sap, and be grayish in appearance. It also needs to be a vegetable that grows from the earth, not from a tree. (Pesahim 39a)

The Mishnah (Pesahim 2:6) lists five possibilities that can be used at the seder, but it’s hard to know what contemporary plants they correspond to. The one that’s most clear is called hazeret in the Mishnah, and hasa in the Gemara. Hasa is the contemporary Hebrew word for lettuce, and as a result, many halakhic authorities today say the best form of bitter herbs is romaine lettuce, which has a bitter aftertaste, even though it is not initially bitter. The outer older leaves of romaine lettuce can contain a grayish milky sap that is very bitter. Other commonly used vegetables are celery (somewhat bitter), endives (pretty bitter), and of course horseradish (both the purple kind, and root itself), also known as chrein. Personally, I think of horseradish as spicy, not bitter, but it’s perfectly acceptable, so if you want to stick with the purple stuff you know, there’s no problem with it.

Incidentally, I think most people who put a potato on their seder plate are using the potato as karpas, the greenery that we dip in salt water. While that may be permissible, I’m with you on thinking it’s a little strange…potatoes aren’t green!

Happy Passover, and I hope your haroset is sweet enough to overpower whatever maror you choose.

What's the deal with hazeret? 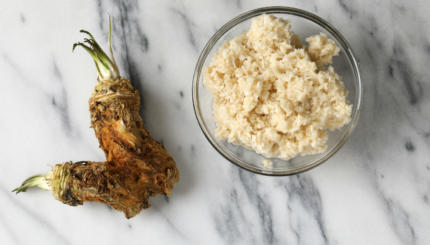