At This Point in Time

In Atlanta, where an estimated 3,000 homeless people that cannot be accommodated in shelters sleep in parks and under highway overpasses, it may be impossible to ignore this growing population. Volunteering with North Fulton Community Charities (NFCC) in the 2019 Point-in-Time Homeless Count, I discovered how homelessness remains hidden in the suburbs just north of the city.

The Point-in-Time Homeless Count is a national census of homeless people, conducted annually by teams of volunteers, many of which include someone living in transitional housing or a homeless person, known as an enumerator. Its main purpose is to ensure that the U.S Department of Housing and Urban Development allocates sufficient funds to cities and counties providing shelter and services to homeless people.

Before we begin, a representative from Fulton County Continuum of Care reminds the volunteers our goal is to survey the “unsheltered” homeless, individuals living in “places not meant for human habitation.” This year, I volunteered to be on a team that would survey the area just west and north of my neighborhood in Sandy Springs. Because I encounter homeless people regularly, at least during daylight hours, I thought I’d be helpful finding where they seek warmth from the near-freezing temperatures at night.

As in previous years, we’re fortunate to have an enumerator in our team, an army veteran currently staying at the Mary Hall Freedom House, a women’s shelter that receives federal funds for homeless initiatives. She’s started taking college courses, and she’ll move to an apartment that is accessible to public transportation, just as soon as she can find one that is affordable. Because she herself was recently homeless, our enumerator is our team member most able to locate homeless individuals.

We make a plan to drive down Roswell Road and stop at a few supermarkets, gas stations and fast food places that are still open after 9 pm before heading to the MARTA stations in our area. When the trains stop running at 1 am, homeless riders will be forced to exit the stations and seek shelter in the stairwells of the commuter parking lots, where they’ll be less exposed to the wind but still subjected to the cold. Some homeless individuals, and even families that can’t find space in shelters or emergency housing sleep in their cars, parked at the edge of strip malls or behind grocery stores. We peer through the fogged windows to observe and count them, but we don’t disturb them to administer the survey.

Most of the businesses—Barnes & Noble, Starbucks and Publix—where I usually see homeless people permitted by managers to use the restrooms or to sit or nap in comfortable chairs, are closed for the night. We’re on our way to Waffle House when our enumerator suggests we stop at a 24-hour laundromat, where she is confident we’ll meet homeless people. No one else in the car, even the member of the city council, had thought to look in a laundromat; we all live in homes with laundry rooms.

As we pull into the parking lot, she confides her discomfort at coming inside and approaching patrons. “My biggest fear is that I’ll offend someone. What if I start to explain why we’re here and they’re not homeless?! I know how bad I’d feel if someone assumed I was homeless.” This badass veteran was holding back tears while admitting how painful that would be, and I let a few tears slide down my cheeks while thanking her for the reminder to be sensitive. For me, an upper middle class, white, suburbanite, it was easy to follow the strategies and script I was given and to maintain a professional distance. For her, this task was intensely personal.

She waits in the car with the driver and city councilman, and another volunteer and I enter the laundromat. We approach a young couple, a man and woman, to introduce ourselves and ask whether there is a manager on duty. The woman tells us there are only two other people in the building, both black women, and gestures toward the end of a row of dryers.

Each of us approaches one of the women. We’re carrying clipboards holding surveys and Kroger gift cards, and information about an emergency shelter at a local church. After reassuring the women that the surveys are anonymous, they agree to answer the questions. But they both answer “yes” to the first question, “Do you have a place to sleep tonight?” We quickly realize they are staying at the Mary Hall Freedom House and are enrolled in the T.R.O.O.P.S program for veterans. We can’t continue the survey because they’re not “unsheltered” homeless, so we ask them instead of their military service. They share their stories while placing their folded clothes in laundry bags, preparing to walk back to the shelter before their curfew.

Our team doesn’t find another soul to interview that night, though we discover the belongings of someone living in the park next to the library, behind the fence surrounding a construction site. We also observe one man sleeping in the last car of a MARTA train, while it sits at North Springs station waiting to return to the airport. We place a blanket and toiletry kit on the seat next to him.

By the time he wakes up and leaves the train, I’ll be home, asleep in my warm bed. 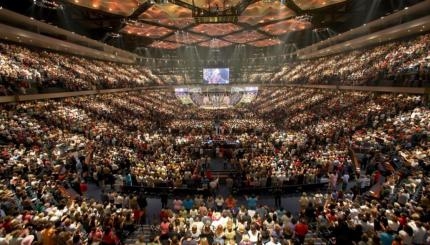 What the Criticism of Joel Osteen Reveals About Us

Anger toward a mega-church pastor in the aftermath of Hurricane Harvey.

After World War II, American Jews left the cities for the burgeoning suburbs.

Is “Justice” a Process or a Result?

The Problem of HomelessnessWhen we think of societal problems, we often think in the abstract. Take the question of “homelessness.” ...