Human beings have devised many rules of three. Perhaps we are physically programmed to create these rules because our bodily survival is determined in measurements of three: 3 minutes without air, 3 hours in a harsh environment, 3 days without water, 3 weeks without food and we will die. Or maybe it’s our neurological programming: we find paintings, drawings, and photographs divided into thirds more visually pleasing. It’s possible we are attuned to rules of mathematics and science—a three-legged stool is more sturdy—or we have devised these cultural rules and reinforced them for millennia. For whatever reason, 3 is our magical number.*

In preparation for 3 days at the border, Katie Sharar of the Kino Border Initiative (KBI) teaches our group 3 principles of the immersion experience: humanize, accompany and complicate. We are a group of ten rabbis and educators, organized by Rabbis Without Borders colleague Charles Arian and hosted by a Catholic organization whose vision is humane, just, workable migration between the U.S. and Mexico. We adopt the language of their mission and strive to fulfill it.

I’ve been home for a full week and, as I sit down to write this blog post, I realize how challenging it is to express anything meaningful in 500-1000 words. I’ll attempt to convey some of what I experienced by sharing some stories I heard from the migrants we met in Nogales. 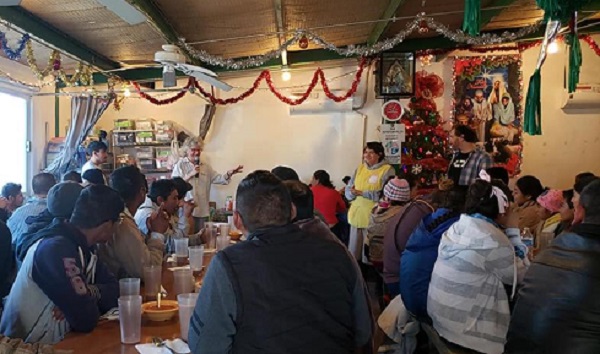 Each day we visit the KBI comedor(soup kitchen) and have only a few minutes to listen to stories of migrants who are there for a hot meal, and medical supplies, or legal advice. There are many parents with children who fled violence in their hometowns and are waiting to be permitted to seek asylum; there are also some people who have been deported and are staying in Nogales before traveling to their homes in southern Mexico, or they are waiting a few nights before attempting to cross the Sonora desert and reenter the US.

One family of seven, who had lived in the southeast for fourteen years and whose children were born in the US, left their home for Nogales when the father was arrested by ICE (Immigration and Customs Enforcement) and deported. The mother chose to leave with their children rather than be separated from him. They’re waiting to request asylum because they fear returning to Guerrero, where they are from originally, where gang violence is rampant. Between sobs, another woman tells harrowing stories of death threats against her children; her daughter’s school was closed after an incident in which girls were surrounded and held by a gang at gunpoint. She and her family of five are trying to reach New Jersey, where their grandfather now lives and where she hopes her eldest daughter can complete high school. It is sometimes difficult to hear their stories because there are more than 100 people crammed into a small space. It is always difficult to listen to their stories without feeling utter despair.

I promise to keep the people I meet in my prayers. It is all I can do.

Most families leave the comedor by 5 pm to sleep in shelters, but there isn’t room for everyone, so women and children get priority. Several young men accept blankets on their way to the cemetery, where their sleep—if they can manage any in near-freezing overnight temperatures—won’t be disturbed by authorities.

I see one man that has been deported leaving with a change of clothes. His son, who appears to be younger than three years old, carries a small backpack. They’ll probably attempt to cross the border again. When I close my eyes that night I see their faces and wonder where they are. I realize we will leave Nogales without knowing the rest of their story.

The migrants we meet in Nogales are human beings who are suffering from desperation. Only a desperate mother would strap her baby to her chest and ride underneath a cargo train, grasping metal on its underside, praying not to fall onto the tracks or be discovered by border patrol agents when crossing the border. Only a father desperate to save his child from being kidnapped or murdered would carry that child on his back as he crossed the desert, praying not to die from dehydration or be swallowed by rising waters in the river bed during heavy rains.

I arrive in Atlanta with renewed determination to humanize, accompany and complicate closer to home. There are hundreds, if not thousands, of people living in fear of being deported, or living in sanctuary waiting to be granted asylum, or living in detention centers in Georgia.

I plan to return to Nogales in the future. Until then, I resolve to talk and write about the 3 days I spent there with KBI. May God bless the work of their hands.

Gasping For Air In Israeli Discourse

I love the ocean.  Whether surfing or just playing in the waves, as a native Californian, I feel at home ...

At the Border of the South: Alexandria, Virginia