A note from Dr. Josh Parshall: Over the past two months, I have had the pleasure of working with two exceptional summer history interns at the ISJL. In addition to helping me with research and writing for the forthcoming Florida section of the online Encyclopedia of Southern Jewish Communities, we have each reflected on our work by answering the prompt “why study southern Jewish history?” So please enjoy these thoughts from Margaret Weinberg, and keep an eye out for the final installment (my own contribution to the series).

I’ve always thought of Judaism as being about food and family. Growing up my grandmother, who we called Gigi, was the most Jewish person to me because I knew very few Jewish people. And, by association, there was nothing more Jewish to me than the food Gigi made. Her recipes were drawn from family, friends, and mid-century magazines, and ranged from stuffed cabbage to glossy white candy cane Christmas meringues (I’ll come back to the meringues shortly). My Gigi was Southern, like the rest of my Jewish family, so to me, “Jewishness” was a Southern accent over the phone.

I knew I had family who lived in the South, but to me it was a place far away. I grew up in New England and never imagined that I would one day embark on a journey of Southern Jewish exploration.

In his piece, “Why Study Southern Jewish History,” historian Gary Zola ask us just that—why explore this intersection of identity at all? He presents us with four arguments: “the utilitarian justification” for the preservation of Judaism in the South, “the inspirational rationale,” which informs collective identity, “the pedagogical rationale,” whereby the study of history informs the knowing of ourselves, and finally the fourth, where, as Walter Raleigh once observed “that history ‘has made us acquainted with our dead ancestors… [and] delivered us their memory and fame” (18).

During my Senior year at New York University, I profiled my Gigi’s cookbook for a writing class on Southern foodways. I traveled to Memphis to visit family members I hadn’t seen in a decade and to learn about my family’s history as Jews in Arkansas. I thought in a “utilitarian” manner, that I needed to collect our history to preserve it in the face of urban migration. I held on to an “inspirational rationale,” that these were my people—I was from them, if not from there, and could foster a community through time and space. I thought “pedagogically,” that to know where I came from was to know myself, and my Judaism, and so I did.

Let’s get back to those Christmas meringues. They felt Jewish to me, because my Jewish world started so small. Jewish foods didn’t necessarily need Jewish origins, they just needed to be made by Jewish people– especially the very few Jewish people I knew.

I grew up in an interfaith family. We went to church occasionally and also tried our hand at Hebrew school. My strongest  memories of holiday celebrations include hunting for the afikoman with a crew of non-Jewish friends, the same ones we shared latkes and barbecue brisket with on Hanukkah, Passover—and Easter. I was one of two or three Jewish kids in my class, both in Upstate New York and later Vermont. My Episcopalian mother took on the dreidel station at class holiday parties.

During my college years in New York City my Jewish palate expanded to include blintzes and pierogies and the history of the Lower East Side neighborhoods I lived in. My Jewishness is still evolving, with the start of my own interfaith family, namely my soon-to-be spouse who is always up for trying kuegel or chopped liver, and who continues my tradition of celebrating Jewish holidays with non-Jewish loved ones.

Like me, my Southern Jewish family also found Jewish identity where they could—adapting to their environment and creating an intersectional space where Southern, Jewish and American all fit. Much of this is positive and and worth celebrating, like gingersnaps crumbled on stuffed cabbage and the close-knit ties developed with other Jews across their rural region. Parts of this require me to reckon with a history of racial politics that, as a Northeasterner, it is all too easy to pretend I’m not part of—the Southern part of that Jewish identity. Studying Southern Jewish history has helped me to preserve, through storytelling and recipe sharing, to inspire, by embracing and reckoning with my historic community, and to understand my Judaism further, by learning about factors that shaped my family members’ identities and examining those inform my own.

Zola tell us “the most instinctive rationale” is that one that “has made us acquainted with our dead ancestors… [and] delivered us their memory and fame.” My Jewish family always lived far away and I knew them, for a long time, as names in a cookbook—“MeeMaw’s Stuffed Cabbage,” “Lynn’s Squash Casserole” and “Mary’s Matzah Ball Soup.” By the time I ventured south, some of those people were gone. Studying Southern Jewish history became a way to connect with the dead. And then it became a way to connect with the living. I moved to Alabama after graduation, where I have seen my Jewish family in two years more than I had seen them in a lifetime before. I go to visit and we share the foods through which I first knew them.

In honor of food and family, preservation, identity, understanding and the “memory and fame,” of my Southern Jewish family, I am including here the recipe for My Aunt Mary’s Hummingbird Cake. Hummingbird cake is not Jewish, it was invented in Jamaica, the recipe featured in Southern Living in 1978. But this one is because it’s my Aunt Mary’s, one of those ancestors with whom studying Southern Jewish history has made me more acquainted, and who undoubtedly tore it from a magazine before cementing it as a staple for Jewish and non-Jewish celebrations alike. It’s as Jewish as my Gigi’s Christmas meringues, because for me, Judaism is still food and family and the places where they meet. 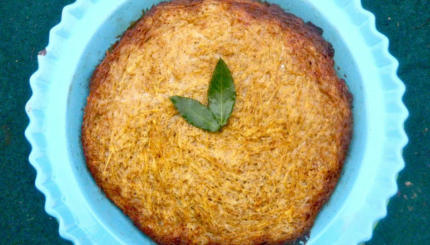 While looking at cooked spaghetti squash one day and noticing its remarkable likeness to its namesake, spaghetti, I was inspired ...