I very often speak to groups of Americans students in order to share with them the story of my transformation into religious peace activist and to offer my take on ways forward in the intractable conflict between Palestinians and Israelis. The Christian groups among them are not infrequently led by Palestinian tour guides or academics, a few of which have become my friends and colleagues.  Sometimes these meetings take place in the various settlements of Gush Etzion. The problem is, Palestinians are forbidden entrance into the settlements, except on workdays, during work hours, with a work permit, and under armed guard. I am not about to take out a work permit for a Palestinian Ph.D., and I am certainly not going to hire a gun-toting guard to protect me from my colleague.

Such a group was scheduled for this past Friday morning. A few days before, I began the negotiations with the security authorities, negotiations that I have been through many times before. It took two days to run a security check on my colleague, and a positive answer was given. He could enter with the group. But only under armed guard. I gently asked, as I always do, for an exception to be made to that rule as well. The answer came back the next day:  No exceptions…

I often travel to the USA together with one of our Palestinian partners, to speak in synagogues, churches, mosques, and universities about the amazing work of Roots, the Israeli-Palestinian grassroots initiative for understanding, nonviolence, and transformation. But it is forbidden for Palestinians to use Ben Gurion airport; they must travel by land to Jordan and then fly from Amman to the USA (and the same on the way back). This adds an entire day of travel to the itinerary, not to mention the added expense. Exceptions are made, especially for organizations devoted to co-existence, and in every one of the 7 or 8 instances in the past that Roots has submitted a special request, it has been granted. But the army keeps us on our toes; the communication from the army has invariably come less than three days before the flight and sometimes on the day of the flight itself, meaning that the ticket had been purchased long before and, had the request not been granted, we would have lost a great deal of money.

In a few days, I am flying out of Israel for another speaking tour, this time with the Roots Palestinian youth director, Shadi Abu Awwad. We were fortunate that the army responded to our request for him to fly out of Ben Gurion airport a good 6 days before the trip. The request, however, was turned down…

Jewish holidays are times of joy, but for Palestinians, they are often a source of severe inconvenience.  The army usually declares a closure of the Palestinian territories for the holidays, meaning that all permits allowing Palestinians entrance into Israel become null and void. Whether it is a permit to enter Israel for work, for medical treatment, to visit relatives or even to engage in interfaith dialogue – all permits are canceled for the duration of the closure.

This past Saturday night Roots had scheduled a home meeting in the city of Modiin. Forty people had been invited to hear myself and Shadi talk about our personal stories of transformation and the Roots’ groundbreaking work bringing the two sides together to meet each other as human beings.

A few days before the event, one of our activists pointed out that the traditional closure was being placed on the Territories for the holiday of Purim and it was to last from Thursday to Saturday night at midnight. We made various inquiries with the army but to no avail. There was no way to make an exception, we were told. Friday afternoon I called the hostess and told her that, to my great dismay, we would have to cancel the event. She was distraught…

There is a happy ending of sorts to each of my three anecdotes, however. In Roots, we have developed very good connections with the Israeli army at various levels of the chain of command, and we don’t hesitate to put them to good use when need be. Thank God that the Israeli army deeply values the work that is done by our initiative.

Only one phone call was necessary and I received an SMS notifying me of the reversal of the requirement that my Palestinian colleague enter the settlement under armed guard.

A different phone call, by a different activist, to an army officer in the normal chain of command, and after a short explanation of the real need involved, a permit for Shadi to fly out of Ben Gurion airport with me was granted.

A third phone call, and within 15 minutes, the rules were relaxed and Shadi and I were able to enter Israel for the home meeting despite the closure.

The system is not an irrational bureaucracy lacking all logic. It contains within an appeals process and recognizes the need for flexibility.

Sounds great. But it is not.

For the vast majority of Palestinians without connections to Israelis who understand the system, it is a bewildering, irresponsive and oppressive bureaucracy that controls their every move in a myriad of ways far beyond the trivial examples given here, leaving them nowhere to turn. It cares but little for the normal Palestinians under its control and sees no reason to grant them ‘Special Privileges.’

‘It’s their fault’, many will say.  ‘We have to protect ourselves from the terrorists in their midst.” There is much truth in these claims, but that does not change the fact that the collective punishment that we have put in place has effectively raised up a whole generation that suffers under a cruel occupation and hates us for it.

We all have to work together to find a way to put an end to this madness. 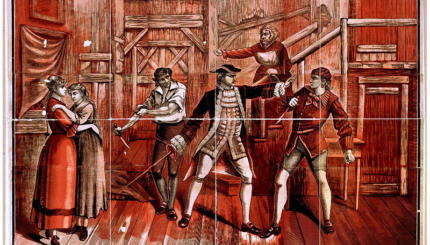 Another way to understand the intractable nature of dual claims to one homeland.