As the presentation begins, I reach into my bag for my notebook and my pen only to discover I’ve left all my pens on my desk where I’d been grading papers. My friend, Hafsa, hands me her pen and I feel a surge of gratitude to be sitting by her side.

I met Hafsa in the early weeks of 2017 when she shared her story over lunch at the Istanbul Cultural Center in Alpharetta with a group of my students from The Weber School. We were spending our January term visiting churches, mosques, and synagogues in Metro Atlanta to learn about our neighbors’ religious traditions. Hafsa spoke of her emigration from Turkey in July; she was here exploring the possibility of studying in graduate school during the attempted coup. Hafsa, her husband, and their young daughters have not been and will not be able to return home.

Kemal Korucu begins the presentation by sharing about forced migration and acknowledging that for many people in the room, the struggles of leaving home–the threat to one’s physical, emotional and spiritual well-being–are particularly relevant. He explains that when he first had the idea to explore this topic, he called Rabbi Michael Bernstein because he thought, “Who knows more about forced migration than the Jewish people?” The conversation exploring common themes in Jewish and Muslim traditions of Hijra and Exodus, wandering and expulsion, diaspora in both the historical and spiritual sense of the word, lasted for more than an hour.

I could have listened to them teach all night. I filled more than a dozen pages in my notebook.

“For Muslims, there are a few things that can happen to you in life that are believed to wipe away your sins and you experience a kind of rebirth: choosing to convert to Islam, making the Hajj to Mecca with the proper intention, and forced migration.” (Kemal Korucu)

“For some Jews, always having a suitcase packed was a physical reminder of both the vulnerability of living in exile–one can be forced to flee oppression– and the yearning for the Jewish People’s return to Israel.” (Rabbi Michael Bernstein)

“The idea of home can be imposed on you by others. Home can be the place you were born, the place you live now, or the place where you feel a sense of religious rootedness–your spiritual home.”

“Whether you have the option to return to where you came from affects how you feel as an immigrant. Not being able to go back can help the next generation accept this new place as home.”

These last two statements could have been spoken by either my Muslim or my Jewish brother and teacher. I remember who said what, but this is secondary to the memory of how many times I turned to Hafsa and we nodded, laughed, cried, and murmured our agreement.

During the Q&A and talk-back with the audience, a self-identified Christian shared her story and concluded, “Home is right here in this room.” And the response of all gathered, in three languages: Amen.

In the last few weeks, we have seen the ugliness of racism in politics, with campaigners using prejudice and fear ... 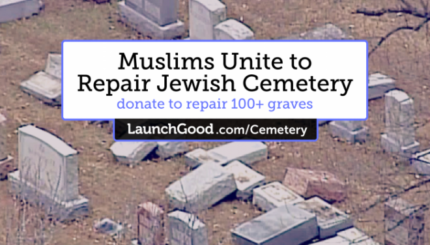 “Solidarity is a Verb, Not a Noun”: On Muslim Fundraising for the St. Louis Jewish Cemetery

This past weekend, hundreds of graves at the Shel Emeth Jewish cemetery in St. Louis were vandalized. No sooner was ...

Throughout the school year, my daughter’s Instagram feed is filled with posts from friends  – “#campzipcode is my home,” “100 ...