I do not envy congregational rabbis this year. I’ve been out of the pulpit for a few years, and I’m seeing many of my friends and colleagues grappling with how to talk about so many of the crucial issues of the day.

Should they talk about politics, or should they strive to make the High Holy Days a “sanctuary,” a place away from the daily barrage of awful news? Should they discuss topics like immigration, climate change, rising anti-Semitism, health care, racism? If so, what should they choose? And if their message is heard as liberal, will they alienate some of their congregants who disagree with them?

They have to be walking multiple tightropes as they craft their messages because, in today’s society, ideas have transformed into identity. In reading and hearing many of my colleagues’ sermons, they are aiming to discuss values, issues, and challenges. They frame their words in the language of Torah, asking what the text and our tradition demand of us here and now.

But the Jews in the pews are hearing those words through the lens of their own stories, beliefs, and outlooks. Some people will hear a sermon and say, “Thank you for expressing what I couldn’t put into words.” But others will hear it and say, “You’ve completely alienated me and destroyed my sense of spirituality.”

As many Jews (myself included) tend to be liberal, we forget that in fact, our country is fairly evenly divided between people of different views. And we’ve turned healthy debates into attacks and counter-attacks. As Bret Stephens recently wrote in the New York Times, “This is [an] age in which we judge each other morally depending on where we stand politically.”

Over the past couple of decades in America, the enduring, complicated divides of ideology, geography, party, class, religion, and race have mutated into something deeper, simpler to map, and therefore much more ominous:

[T]wo tribes whose mutual incomprehension and loathing can drown out their love of country, each of whom scans current events almost entirely to see if they advance not so much their country’s interests but their own. I mean two tribes where one contains most racial minorities and the other is disproportionately white; where one tribe lives on the coasts and in the cities and the other is scattered across a rural and exurban expanse; where one tribe holds on to traditional faith and the other is increasingly contemptuous of religion altogether; where one is viscerally nationalist and the other’s outlook is increasingly global; where each dominates a major political party; and, most dangerously, where both are growing in intensity as they move further apart.

When Jews come for the High Holy Days, it’s a time when they feel some of the strongest connections to their “tribe” — a pride in being Jewish, a commitment to spending multiple (and long) days in the synagogue, a reinforcement of “who they are.” It’s a time of great sense of belonging, but given how polarized we are becoming, there’s a good chance that people who disagree with the rabbi politically will actually disengage with — or even lose — that crucial sense of identity.

So what do we do? We certainly don’t want to banish opposing viewpoints, but rabbis also have a right and a responsibility to share the Torah as they see it and how they interpret it.

The answer is simple: We shouldn’t talk about people we disagree with; we should talk to them. We need to hear opposing views, uncomfortable perspectives, and challenging ideas. Yet when we do present them, we need to make sure to do it respectfully. And we need to think: is our goal to be right, or is our goal to be effective?

Because ultimately, around 7:30 pm on Saturday, most of us will be gathered around some food to discuss the rabbi’s sermon with our friends and family. When we do, whether we agree or disagree with the message, just remember — the goal of the sermon, the goal of Yom Kippur, and indeed, the goal of Judaism, isn’t to advance a political agenda. It’s to help us become better people in 5778 than we were in 5777.

So if we can separate out ideology from identity, if we can challenge without alienating, if we can ensure a sense of community and safety for those who disagree with us, we will be able to move out of our comfort zone and allow ourselves grow — intellectually, spiritually and morally. 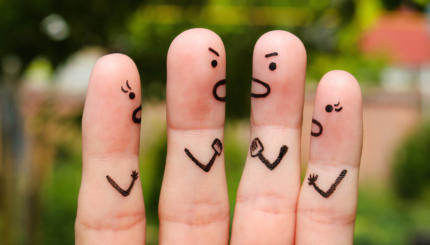 I Don’t Go To Brooklyn

Cruising on Fifth Avenue one day, a taxi is hailed by a man standing on the corner. Entering the cab, ...

Rabbinic scandals, anyone? Voyeurism, clannishness, sexual harassment, court battles over defamation. We’re shocked — not just because we expect better, but ...