One of the best parts of being a parent for me has been seeing who my kids have become. They each have their own interests, talents and personalities that make them who they are. At 17 years old now, they are definitely their own people with their own ideas. It’s especially remarkable too see how different they are considering that they are twins.

My daughter is very into all things Jewish right now – especially her youth group. She comes by it naturally as she is the product of two Jewish professionals: I am a Jewish Educator, and her father is a Rabbi. I’ve been watching her attend countless events and assume a variety of leadership roles. She is most recently the president of the local NFTY youth group and is on cabinet for the region. She loves every minute (just like I did) and she can’t get enough. It’s been a new experience for me because it’s more than just seeing that your child likes something that you did, it’s watching her have the same connections, emotions, and impact that you did. I feel at times as if I am watching her live out my past.

She returns from events with the same hoarse voice as I did. She faces the post-event-depression, when you feel like you will never feel as connected to other people as you do your camp/youth group friends. She is exhausted for days after and begins counting down the days until the next event immediately. I am also watching how these experiences are changing her as a person the way that they changed me. She’s discovering issues that she is passionate about. She wants to share her excitement with others. She wants to strengthen the organization so that it can be the best it can be. She wants to be involved in every aspect and experience everything. 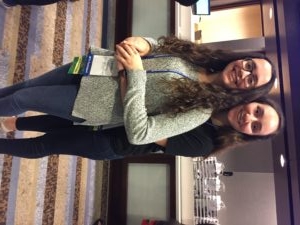 Instead of the usual teen angst of being annoyed that your parent is involved in something that is yours, she was loving knowing that she was literally walking in my footsteps and taking the time to connect to the people that had meant so much to me and still do.

As much as I wanted to call her constantly, I contained myself and waited until she was home. There she was with her bleary eyes from no sleep, her shredded voice and her sad face missing her friends. Once she started talking she couldn’t stop. The excitement of all that time spent with people she loves, old and new. Wanting me to hear each and every thing that she did and why it mattered. The plans for her future and the promises she made to make a difference.

It was an out-of-body experience for me because as I was listening to her, each and every word was familiar. Not only did I know how she felt, but she also had a deeper understanding of how I had felt and the experiences that shaped me as a person. It was a precious moment that I’ll never forget.

I’m not sure if I should tell her now or later but I think I may just know the perfect career for her.

It just so happens to be mine.