Sukkot appears to be one holiday in which the Moroccan and Ashkenazic customs and rituals are fairly similar. We both use the lulav and etrog and we both build a sukkah. I imagine that the sukkah building materials might have differed in Morocco than the materials my family used in London, England and before that in Russia and Poland.

One thing that do I know was different was the temperature outside when sitting or sleeping in the sukkah. My husband, Motti, is not sure about whether families slept in their sukkot during the holiday back in Morocco though the average temperatures in Casablanca during the months of September and October range from 66 – 73 degrees Fahrenheit (I checked!) so it does seem possible. He does, however, remember once sleeping in the sukkah as a kid in Beersheva, but it did not seem to be a family tradition.

My paternal great grandfather, on the other hand, did sleep in the sukkah and had an ingenious way of dealing with the London rain. He had a retractable roof which he used when the weather was not cooperating. Apparently he always slept outside during the holiday which is remarkable when you consider the rain and the chilly temperatures (55-61 Fahrenheit on average – yeah I checked that out too!).

Here is New Jersey, we do not sleep outside, but we do have an annual gathering in our sukkah on the second day of Sukkot in which we tend to play, “Can we outdo ourselves again this year?” Perhaps I’m a little insane, but I have kept track of my guests and menus for all Jewish holidays, plus Thanksgiving, for about the last 12 years or so. Subsequently, although my friends may not recall what was for dessert on Sukkot 2012 or 2013, I know and often don’t want to repeat myself so soon.

At the same time our guests have also developed a fondness for certain dishes such as Motti’s vegetable soup (a self-created item that technically is always changing!) and his myriad of Moroccan/Israeli salads including, but certainly not limited to, roasted peppers and various eggplant dishes. Our friends look forward to our Sukkot lunch and can name certain favorites that they hope will top the menu this year. I too have made some dishes along the way which are also enjoyed by our guests including Moroccan fish and baklava, the latter perhaps not so Moroccan, but passed along to me by my Tunisian sister-in-law Shosh and made by other family members. Please take note that it is not as difficult to make as you think as long as you are not planning to make the filo dough yourself.

This year we are bringing out a few of the old time favorites and trying some new dishes. We will see what works and what if anything makes its way into the Benisty top ten. In the meantime, I recommend trying the roasted peppers and baklava when you get the chance. You won’t regret it!

Note that this dish will keep for several days.

Baklava appears as a favorite dish through the Middle East. Filo dough one of its essential ingredients can be found in many grocery stores and specialty markets but be sure to check the date to assure buying fresh products.

Directions
1)    Defrost filo sheets/leaves as per the instructions on the box.
2)    Grease an oblong pan or baking sheet
3)    Brush half the leaves (ten) completely with the margarine one at a time on one side only. Arrange them one on top of the other in the pan.
4)    Mix together walnuts, sugar and cinnamon
5)    Sprinkle the mixture evenly over the prepared filo sheets.
6)    Repeat step three with the rest of the filo sheets.
7)    Freeze for one hour.
8)    Remove from freezer and cut completely through dough making diagonal lines in both directions so that little diamond shapes are formed throughout the dough.
9)    Bake in a 400 degree oven for about a half hour, but check after 20 minutes to make sure that the dough does not begin to burn.
10) Remove from oven and pour the honey over the diagonal cuts in the pastry. Let honey absorb, cool and serve. 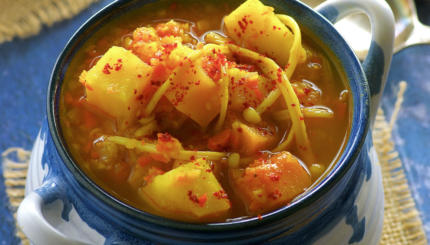