The four species of Sukkot are the etrog, palm, myrtle and willow. The lulav is the palm, but sometimes all four together are referred to as the lulav, since it is the most prominent of the four.

Four Species and the Four Letters in God’s Name

The four [species] represent the four-letter Name of God, with the lulav being the [Hebrew letter] vav, which channels the divine energy into the world and man. If for no other reason, the four must be held together while waving for the Unity of the Name.

There is a masculine-feminine symbolism within the Four Species, besides that represented within God’s Name. The lulav is obviously a masculine symbol and the etrog, with the form of a breast, is obviously feminine. Since these are conduits of divine flow, it is important that they be perfect and whole. The necessity of having the pitom intact makes ultimate sense in this context (cf. Sefer Sefat Emet, the comment on Sukkot).

Each Species Alludes to God

Each of the species is a hint or allusion to God, according to a Midrash found in Leviticus Rabbah, 83:

Etrog — because it is written (Psalms 104: 1): ‘You are clothed in glory and majesty.’ (The word translated as majesty is hadar. In the Torah (Leviticus 23:40), the etrog is called the fruit of the goodly tree.  The same Hebrew word, hadar, is used in that context to mean goodly.)

Myrtle — because it is written (Zechariah 1:8): ‘And he stood among the myrtle-trees.’

Each of the four relates to a particular limb through which man is to serve God (cf. Sefer ha-Hinukh, #285):

Etrog refers to the heart, the place of understanding and wisdom.

Palm refers to the backbone, uprightness.

Myrtle corresponds to the eyes, enlightenment.

Willow represents the lips, the service of the lips (prayer).

Taste represents learning. Smell represents good deeds. The etrog has both taste and smell. The lulav has taste but not fragrance. The myrtle has smell but no taste. And the willow has neither. Each represents a different type of man. Some have both learning and good deeds; some have one without the other; and some have neither. Real community is found in their being bound together and brought under one roof.

Symbolism of Waving the Four Species

The motion and order of the wavings is highly significant.

Through all of these, the themes of Sukkot are played out and interwoven beautifully: redemption, universal peace and brotherhood, completion.

Reprinted with permission from The Jewish Catalogue: A Do-It Yourself-Kit, edited by Richard Siegel, Michael Strassfeld and Susan Strassfeld, published by the Jewish Publication Society. 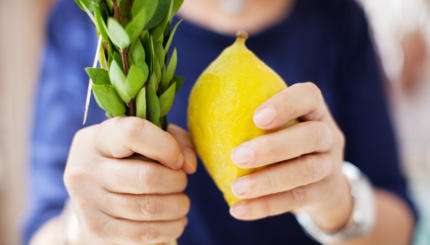 What Are the Lulav and Etrog?

The four species waved on Sukkot.