It’s hard to kvetch about being a Japanese Jew when you’re being spoiled by ladles of chicken schmaltz spoon-fed to you by your father, while your mother asks if you would like some more teriyaki sauce on your beef yakitori.

And did I mention my parents arguing about whether both challah and rice should be served at every meal?

Let’s just say they both usually got their way, which was a good thing. What’s not to love about a dinner table with both borscht soup and miso soup, alongside beef brisket, sashimi and some latkes just for good measure?

While that may sound like an overly-exotic combination for some, the sharing of cultural recipes passed down from both cultural sides is what brought us closer together as a family.

As a kid, I assumed everyone had parents who debated whether lox or sautéed salmon was the healthier choice well before “Omega-3 Fatty acids” was ever a religion, while I enjoyed both macaroons and mochi balls for dessert.

And the generation of food-love didn’t end with my parents. My Jewish grandfather “Booby” made a hearty feast of sweet and sour cabbage stew. And my Japanese grandma “Hatsuyo” was known for her Sukiyaki, also known as  “steamboat cooking,” made with beef, vegetables, soy sauce, sugar and sake.

You can bet my house was popular in my all-Jewish neighborhood. And I thought kids liked me for me. Who was I kidding? They just wanted to get closer to my mom’s home-cooking.

Word got around alright, and I couldn’t blame friends for wanting charoset and mandelbrodt served alongside chicken gyoza and udon noodles. And to make things brighter, my father was the resident stand-up comic with his borsht-belt humor and one-liners we awaited each night.

Dinnertime was “the time” we felt most connected; a moment when we could forget about the angst we often felt as a culturally blended family, in the days when interfaith families were far from being accepted.

Comedian Milton Berle once observed, “Any time a person goes into a delicatessen and orders a pastrami on white bread, somewhere a Jew dies.”

Uncle Milty, perhaps that once “seemed” to be the case, but today there are Jews who enjoy a much more diverse palette. For example, at a Japanese restaurant last week, there were more Jewish patrons who knew varieties of California rolls than I did.

Soy vey, this is a great thing.

Today, I am blessed with daughters of my own who I can lavish with tasty dishes that have been passed down from both sides of my food-obsessed family.

And yes, I will admit that I have officially become both my mother and my father, which used to be my greatest fear.

I recently guilted my older daughter when she wouldn’t eat my larger than usual matzah balls. Under my breath I muttered, “Is it too much to ask that you should want to eat your own mother’s food I spent all day cooking?”

And I channeled my father today when I asked my younger shayna maidel to tell jokes for people at the market, bribing her with some tasty knishes..

“Oh, don’t be such a nudge,” she said to me as she gave me a quick hug and prepared to deliver a joke that could rival my father’s.

This is bashert, I thought. Each generation carrying on traditions that can only be described as poignant and even sweeter than my famous babkas.

Below you will find two favorite family recipes. May you serve and enjoy eating them with your family and friends.

And if you don’t, no worries. I’ll just sit here in my kimono in the dark, eating a knish or two.

Lovingly gather a large pot, like you would for a hearty chicken noodle soup. Add Dashi to pot and bring to a hearty boil and add sake, salt, Mirin, soy sauce, and some words like “This is going to be the best Udon ever, because I made it.”

Bring to a simmer and slowly add chicken so as not to burn your hand, let simmer for 3 to four minutes.

Next, add all of the green onions for a zesty flavor, and the udon noodles as well.

For beauty and a delicious subtle flavor, add the pink and white fishcake to garnish each individual serving,

Now, happily call about four people in the house for a great dinner that will have them asking for more!

Extra ingredients such as potatoes, peas, and other vegetables can be added as well for variety.

Combine water, broth, and brisket in a large pot and bring to a boil, watching over carefully.
Simmer and add other ingredients, stir as needed and simmer with cover for two and a half to three hours until meat is tender and soft.

Happily sample the stew and add additional seasoning to taste. The stew is best when accompanied by bread, potatoes, rice, and sides of horseradish and salads.

Extra ingredients such as peas, cabbage, and fish are delicious too!

Simply put all ingredients into crock-pot on high for 4-6 hours or on low for 10-12. Can also be cooked on low heat in a large pot or skillet on stove.
Great for freezing and reheating for all hungry family members and guests for both lunch and dinner.

Camp is almost here.  As you pack the duffel bags, label the underwear, and organize the toiletries you have to ... 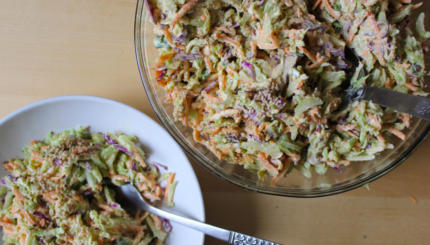 Noodles tangle together under a sweet, nutty sauce and combine with shredded grilled chicken for an easy make-ahead dish.