Upon examining the history and heritage of the Jewish people, we find that Judaism is deeply connected to the Middle East and North Africa: Sarah and Abraham came from Mesopotamia, the land that is today Iraq — the same land where the first yeshivas and the Babylonian Talmud were developed. The festival Purim celebrates the liberation of ancient Iranian (Persian) Jews, and Passover tells the story of ancient Egyptian Jews. Hebrew developed alongside other Semitic languages in the Middle East and North Africa and Jewish prayers and holiday cycles reflect the weather patterns of that region. (It was not, for example, meant to snow in the sukkah.)

Regardless of where Jews lived most recently, therefore, all Jews have roots in the Middle East and North Africa. Some communities, of course, have more recent ties to this region: Mizrahim and Sephardim, two distinct communities that are often confused with one another.

The Beginnings of the Jewish People

Mizrahim are Jews who never left the Middle East and North Africa since the beginnings of the Jewish people 4,000 years ago. In 586 B.C.E., the Babylonian Empire (ancient Iraq) conquered Yehudah (Judah), the southern region of ancient Israel.

Babylonians occupied the Land of Israel and exiled the Yehudim (Judeans, or Jews), as captives into Babylon. Some 50 years later, the Persian Empire (ancient Iran) conquered the Babylonian Empire and allowed the Jews to return home to the land of Israel. But, offered freedom under Persian rule and daunted by the task of rebuilding a society that lay in ruins, most Jews remained in Babylon. Over the next millennia, some Jews remained in today’s Iraq and Iran, and some migrated to neighboring lands in the region (including today’s Syria, Yemen, and Egypt), or emigrated to lands in Central and East Asia (including India, China, and Afghanistan)

Sephardim are among the descendants of the line of Jews who chose to return and rebuild Israel after the Persian Empire conquered the Babylonian Empire. About half a millennium later, the Roman Empire conquered ancient Israel for the second time, massacring most of the nation and taking the bulk of the remainder as slaves to Rome. Once the Roman Empire crumbled, descendants of these captives migrated throughout the European continent. Many settled in Spain (Sepharad) and Portugal, where they thrived until the Spanish Inquisition and Expulsion of 1492 and the Portuguese Inquisition and Expulsion shortly thereafter.

During these periods, Jews living in Christian countries faced discrimination and hardship. Some Jews who fled persecution in Europe settled throughout the Mediterranean regions of the Ottoman (Turkish) Empire, as well as Central and South America. Sephardim who fled to Ottoman-ruled Middle Eastern and North African countries merged with the Mizrahim, whose families had been living in the region for thousands of years.

Mizrahi Jews Around the World

Throughout the rest of the world, Mizrahi Jews have a strong presence in metropolitan areas — Paris, London, Montreal, Los Angeles, Brooklyn, and Mexico City. Mizrahim and Sephardim share more than common history from the past five centuries. Mizrahi and Sephardic religious leaders traditionally have stressed chesed (compassion) over humra (severity, or strictness), following a more lenient interpretation of Jewish law.

Despite such baseline commonalities, Middle Eastern and North African Mizrahim and Sephardim do retain distinct cultural traditions. Though Mizrahi and Sephardic prayer books are close in form and content, for example, they are not identical. Mizrahi prayers are usually sung in quarter tones, whereas Sephardic prayers have more of a Southern European feel. Traditionally, moreover, Sephardic prayers are often accompanied by a Western-style choir in the synagogue.

Mizrahi Jews traditionally spoke Judeo-Arabic — a language blending Hebrew and a local Arabic dialect. While a number of Sephardic Jews in the Middle East and North Africa learned and spoke this language, they also spoke Ladino — a blend of Hebrew and Spanish. Having had no history in Spain or Portugal, Mizrahim generally did not speak Ladino.

In certain areas, where the Sephardic immigration was weak, Sephardim assimilated into the predominantly Mizrahi communities, taking on all Mizrahi traditions and retaining just a hint of Sephardic heritage — such as Spanish-sounding names. In countries such as Morocco, however, Spanish and Portuguese Jews came in droves, and the Sephardic community set up its own synagogues and schools, remaining separate from the Mizrahi community.

Diversity Within the Communities

Even within the Mizrahi and Sephardi communities, there were cultural differences from country to country. On Purim, Iraqi Jews had strolling musicians going from house to house and entertaining families (comparable to Christmas caroling), whereas Egyptian Jews closed off the Jewish quarter for a full-day festival (comparable to Mardi Gras). On Shabbat, Moroccan Jews prepared hamin (spicy meat stew), whereas Yemenite Jews prepared showeah (spicy roasted meat), among other foods.

As Mizrahi and Sephardi Jews are a minority of Jews in North America, their heritage remains foreign to many North American Jews of Central and Eastern European heritage (known as Ashkenazim). Yet just as the world begins to embrace multiculturalism, so too has the Jewish community begun to acknowledge and celebrate the wonderful cultural diversity that exists among its own people.

It is interesting to grow up in an old world family with new world ideas. My childhood dinners were created ... 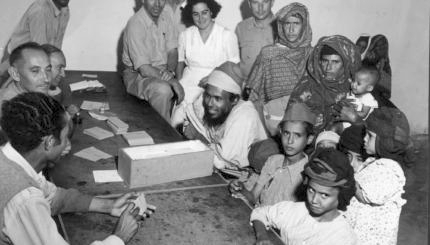 Jews from Arab lands are gaining more and more influence in Israeli society.