While this recipe was designed for Lag Ba’Omer, it is a nice treat throughout the summer, especially when you want to grill, but don’t want the heaviness of meat.

Although Lag Ba’omer falls between Passover, when the Jews left slavery in Egypt, and Shavuot, when they received the Torah at Mount Sinai, the holiday has nothing to do with the story of the Exodus.Today there is still debate about the origins of the holiday, and its observances are often seen as cryptic. The most visual of Lag Ba’omer traditions–the lighting of torches and bonfires–has its roots in the belief that the day might mark the death of Rabbi Shimon Bar Yohai, who is credited as the author of the mystical Zohar. His students commemorate the day by converging on his grave with glowing torches.

As an extension of the bonfires, Israelis take advantage of a national culinary pastime–grilling. While this traditionally involves meat, one can opt for lighter dishes made with dairy components.

This salad is made with halloumi, a cheese whose firm, rubbery texture lends itself to grilling over a hot flame. Halloumi has its origins in Lebanon and Cyprus. Some claim its roots in Israel lie with Greek-Jewish immigrants. The cheese is best served warm with grilled fish, crusty bread, or fresh fruit for dessert.

To make vinaigrette:
Whisk all ingredients together in a bowl and reserve.

To make salad:
Clean and lightly oil a gas grill or grill pan, then heat over medium-high heat for five minutes. Brush peppers with olive oil and place on grill, pressing down to make peppers as flat as possible. Grill until edges are black and grill marks have formed, about 5-6 minutes per side. Remove from grill. While peppers are cooling, grill cheese until grill marks form, 3-4 minutes per side. Remove from grill. Slice peppers and cheese into equal-sized strips and place in a bowl. Pour vinaigrette over peppers and cheese and toss gently to combine. Garnish with more parsley, if desired.

Lag Ba’Omer is next week, and one of the customs of this minor holiday is to light bonfires and eat ... 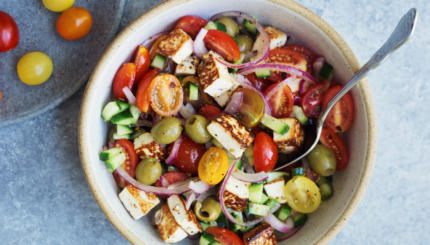 This salad is an explosion of flavors and textures you will love.