Lou Reed — who was best known as the vocalist, guitarist and songwriter for The Velvet Underground — had another love besides rock music: the frothy beverage known as egg cream. In his song of the same name, the “Walk on the Wild Side” singer wrote this about his Brooklyn upbringing in the 1950s:

The only good thing I have to say about P.S. 92
Was the egg cream served at Becky’s, it was a fearsome brew
For 50 cents you got a shot, choco bubbles up your nose
That made it easier to deal with knife fights
And kids pissing in the street
No Eggs, No Cream?

The chocolate egg cream of Reed’s youth boasts several rivaling — and often contradictory — creation stories, all of which take place in the late 19th and early 20th centuries. The most popular version claims Louis Auster, a Jewish immigrant who owned a candy store on New York’s Lower East Side, as the egg cream’s inventor. According to legend, the Yiddish actor Boris Thomashefsky compared Auster’s refreshing drink to the “chocolat et creme” he drank on a trip to Paris. While Auster’s recipe contained neither cream nor eggs, “et creme” sounded enough like “egg cream” that the name stuck.

While the exact original recipe is unknown, most devotees agree that the basic egg cream combines seltzer water (not the barely bubbled stuff that comes in plastic bottles, but real seltzer from a soda fountain or a pressurized cylinder dispenser) with a splash of milk and Fox’s U-Bet chocolate syrup. Created by Herman Fox in the 1890s, Fox’s U-Bet uses cocoa and cane sugar instead of corn syrup and artificial flavorings, and has remained the egg cream’s closest syrup companion for more than 100 years.

Throughout the early 20th century — both on the Lower East Side and also in Brooklyn and the Bronx, as Jews climbed their way out of the tenement — the egg cream reigned as New York City’s iconic “Jewish drink.” That said, there is nothing inherently Jewish about an egg cream, except that it was created and consumed by Jews.

Jennifer Berg, who directs the graduate program in Food Studies at New York University, said, “[Lower East Side Jews] ate foods that were inexpensive and easy to acquire — but they did not yet have symbolic value. The egg cream replicated the thick, American chocolate malted they could not afford, so at the time, drinking egg creams probably made them feel more American, not Jewish.” It is only in retrospect and through a lens of cultural nostalgia, then, that the egg cream took on any Jewish significance.

Today, the egg cream is enjoying something of a modest renaissance, as its original drinkers wax nostalgic and younger generations grab onto their cultural heritage. But while the drink is still served at Junior’s Cheesecake and other establishments across New York, the best way to ensure that your egg cream won’t leave you feeling flat is to make it at home.

about 1 cup cold seltzer (ideally from a seltzer dispenser)

Spritz with seltzer almost to the top.

Add the syrup, wait a moment for it to fall to the bottom, and then stir with a long spoon. If you get at least an inch of foam, you did it right. 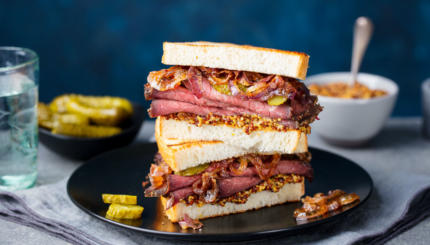 Ever since Jennifer 8 Lee wrote about the reemergence of the egg cream earlier this month in The New York ... 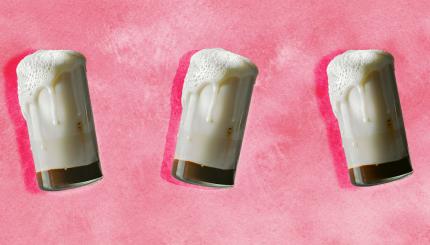 How to Make an Egg Cream

It's easy to make your own version of this iconic drink at home.