In Islam, the Koran does not stand entirely on its own. Rather it follows and is understood to complete the Torah. So too, the prophet Mohammad does not stand on his own. His prophecy recognizes and completes that of Moses (and others).

The Muslim holy month of Ramadan that Muslims worldwide are now celebrating marks the revelation of the Koran. But that is not all that it marks. Islamic tradition teaches that while the Koran was revealed on the 24th of the Islamic month of Ramadan, the Torah was revealed to the Children of Israel on the sixth day of that same month. Together with all its other points of significance, Ramadan is the month of the revelation of the holy books.

We Jews celebrate the holiday of Shavuot marking the giving of the Torah on the sixth of the Hebrew month of Sivan.  When Mohammad told his followers that the Torah was given on the sixth, he was clearly drawing on Jewish tradition. The matter of the day of the month is clear enough, but what about the month itself?

The opinion has been expressed that the year that Mohammed made his declaration the months of Ramadan and Sivan happen to overlap. This is of course eminently plausible, but I would venture to suggest that the alignment between Ramadan and Sivan cuts deeper.

Lo and behold, the correlation between Ramadan and Sivan is not coincidental but rather fundamental. In the sense we have described, they are the same month.  Mohammad was being completely faithful to Jewish tradition when he stated that the Children of Israel received the Torah on the sixth day of Ramadan. Muslims and Jews commemorate revelation during the same month, and they focus on the Jewish aspect of revelation, the giving of the Torah, on the very same day, the sixth of that month.

Both the Hebrew months and the Islamic months are based on the lunar cycle. While the Muslims follow a strictly lunar calendar, the Jewish one is inter-calculated based on the solar cycle, meaning that at certain fixed times an extra lunar month is added to ensure that the holidays don’t rotate through the seasons as they do in the Muslim calendar. It happens only nine or 10 times in a solar century that Ramadan and Sivan coincide. This year, like last year and next year is one of those rare instances when the two months align.

As I write, the sun is setting over the hills of Alon Shvut, Gush Etzion [in the West Bank] where I make my home. The cry of the muezzin wafts through the valley that separates my abode from the nearby Palestinian village of Khirbat Zakaria. My Muslim friends and neighbors have just completed the third day of their fast. They moisten their lips with water, pray the fourth prayer of the day and will momentarily be sitting down to their iftar (break-the-fast) meal. At this very moment of twilight that both separates and connects between day and night, we Jews will usher in the holiday of Shavuot on Tuesday evening.  We descendants of the Children of Israel will receive Torah, and Muslims will remember that the Children of Israel received Torah.

The discovery of our parallel celebrations of the revelation of Torah is a revelation of sorts for me. And their alignment this year is perhaps a sign. We live so close to each other. We have so much in common. What are we waiting for?

A Sephardic agreement between God and Israel 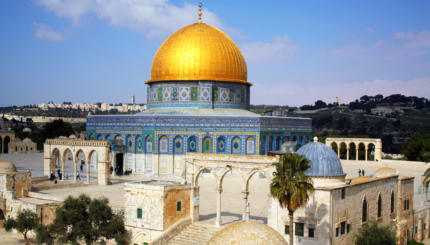